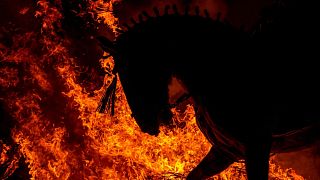 Animals are blessed across Spain as they celebrate the day of Saint Anthony   -   Copyright  AP
By Shannon McDonagh  with agencies  •  Updated: 17/01/2022

About a hundred horses spectacularly jumped through bonfires in a purification ceremony on Sunday during the Spanish festival of 'Las Luminarias', which was held for the first time since the start of the COVID-19 pandemic.

The traditional nighttime celebration takes place in the town of San Bartolomé every January 16, the eve of Saint Anthony's Day, Spain's patron saint of animals and better known to them as 'San Antonio'.

The event was cancelled last year because of pandemic restrictions.

Revellers rode their horses through the narrow cobblestoned streets which – according to tradition – purified the animals with the smoke and flames of the bonfires for the coming year.

After an hour of horses jumping over flames, revellers then took to dancing and drinking.

A rider goes through flames during the annual "#Luminarias" celebration on the eve of #SaintAnthony's day, Spain's patron saint of animals, in the village of San Bartolome de Pinares, northwest of #Madrid, Spain January 16, pic.twitter.com/cH2yNRipp0

Locals believe the horses will protect them throughout 2022

Some say it is related to ancient Catholic traditions of fighting disease through cleansing by smoke.

"This comes from thousands of years ago. So that animals did not get unwell, the old priests would bless them with fires so that they would jump and be purified," explains 64-year-old Fermin Abad, a local resident.

About 100 horses and their owners took part in the festivities.

"These purifying fires, intended to protect animals from all diseases, are celebrated (in this village) on the eve of San Anton" says Anton Erkoreka, director of the Basque Museum of the History of Medicine.

He recalls that across Spain, masses are celebrated to bless the animals alongside other people's pets.

"We are thus seeking to obtain the protection of the Saint for the animals", he adds.

Ana Gómez, Mayor of San Bartolomé, said the festival celebrates animals and it is something that local residents love "with intensity".

Despite coming under criticism from animal rights groups over the years, organisers insist that the horses were not harmed due to precautions taken by riders to cut horse hair to avoid burns.

"You don't even realize it. It's like running your finger over a lighter," explains local onlooker Andrea Penela.