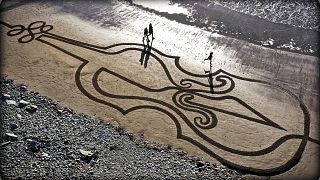 A piece of sand art has been etched on the shores of an Irish cove to remember the loss of Ashling Murphy.

'A Fiddle for Ashling' – created by Sean Corcoran at Kilmurrin Cove in County Waterford – symbolises a loss that has left the country grief stricken.

On January 12 Murphy was fatally attacked while out running along her local canal.

Friends and family have since shared fond memories of her life as a primary school teacher and traditional Irish musician.

Environmental artist Corcoran, who goes by The Art Hand on Twitter and runs an art school and studio of the same name in Waterford, shared a video of his ephemeral work.

Corcoran wrote on Twitter that: “I drew it as one continuous line that represents the uncharted journey through life.”

A fiddle for Ashling...tribute to Ashling Murphy on Kilmurrin Cove, Waterford. Ashling was a renowned musician, a much loved teacher, a daughter, a sister and a friend. I drew it as one continuous line that represents the uncharted journey through life. RIP #AshlingMurphypic.twitter.com/Z8dBe1bRdW

Check out the video above for a closer look at the stunning sand tribute.

Vaccine sculptures and textbook drawings: Where do art & science meet?