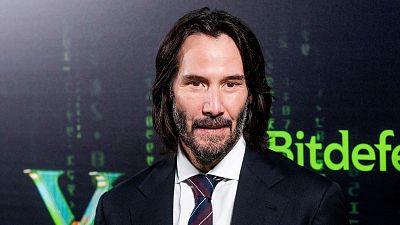 The famously introverted Canadian actor is giving interviews for the first time in years   -   Copyright  AP
By Shannon McDonagh  & AP  with Reuters  •  Updated: 14/01/2022

Keanu Reeves revealed he once asked the late-Velvet Underground singer Lou Reed for his autograph.

The "nicest man in Hollywood" participated in a segment called 'The Colbert Questionert' on Wednesday night as part of promotions for the sci-fi classic's latest installment, in cinemas 19 years after its last.

Asked whether he'd ever asked someone for their signature, Keanu recalled how he approached the Lou for his autograph on behalf of a friend.

"He was cool about. It was a little piece of paper with blue ink. It was good. (It said), 'Lou Reed.' You never know, it's Lou Reed," he smiled.

Keanu then went on to share that he also once asked comedian George Carlin, who passed away in 2008, for an autograph.

"I always thought he just wrote that for me and then I met someone else who said that he wrote the same thing to them. Anyway, beautiful."

The return of 'The Matrix'

Fans of the famously introverted actor have also been lapping up the opportunity to hear about his time on the set of the long-awaited new Matrix film.

Reeves said he felt no concern making 'The Matrix Resurrections' because of its "exceptional" storytelling.

"I was really excited to work with the director—Lana Wachowski—and writer again, and so that if I had any concerns about that, it was really answered by speaking with her, you know, I was just like, 'OK, yes, let's keep it going. Let's go,'" said the action star.

"I don't know how people are going to react to it. So there's that concern, like, you hope they like it. But personally, I wasn't like, it was still like ughhhh. We still are like what's it about? What's the script? And that was, that was exceptional. So I was all on board."

Other cast members include Jada Pinkett Smith who also reprises her role from past 'Matrix' films, along with new additions Christina Ricci, Jessica Henwick, Jonathan Groff and Priyanka Chopra.