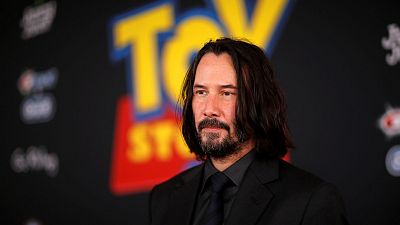 Keanu Reeves surprised his team with the thoughtful gifts during dinner in PAris   -   Copyright  REUTERS/Mario Anzuoni
By Shannon McDonagh  with Reuters  •  Updated: 28/10/2021

The 57-year-old actor presented Bruce Concepcion, Jeremy Marinas, Dave Camarillo and Li Qiang with silver timepieces featuring engraved messages on the inside during a recent dinner in Paris, France, to mark the end of filming.

Marinas took to his Instagram Stories to show off his new Rolex Submariner, which he described as the "best wrap gift ever".

The engraving read: “The John Wick Five", along with each stunt performer's name and "Thank you Keanu JW4 2021.

It's not the first time the acting legend has expressed his gratitude to the work of stunt performers.

A keen motorcycle enthusiast, he bought Harley Davidsons for all twelve coordinators working on 'Matrix: Reloaded'.

The nicest man in Hollywood?

While Reeves maintains a relatively low profile compared to his contemporaries, the introvert no stranger to a good old-fashioned random act of kindness.

In 2019, a fan encounter went viral in when the actor bought ice cream at a cinema just so a paperless fan would have a receipt he could autograph.

He is also reported to run a private charity without his name attached to it that funds cancer research and pays medical bills for sick children.

'It was the sweetest thing'

Octavia Spencer recently admitted she "cried" when she received a happy birthday message from the 'Matrix' star when she turned 50 in May.

Discussing the star-studded tribute videos she was sent by close friends and past co-stars, she said: "Chris Evans is a dear friend. Katy Perry is a dear friend. Then Keanu Reeves, you know like, surprised me. Of course I started crying like a baby.

"It was so fabulous. He's somebody I like and my friends know that and it was like the sweetest thing."

The ‘Hidden Figures’ star previously revealed Keanu was one of the first people she met when she moved from Alabama to Los Angeles to pursue acting.

"I had an audition and my car broke down and no one would help me because my car was so dirty until Keanu Reeves. He was on a motorcycle and had his little motorcycle helmet and sunglasses and was like, ‘Hey, you need some help?'," she revealed in 2014.

Reeves verified the story himself last year in an appearance on the UK's Graham Norton Show.

And because the ‘John Wick’ star was so helpful, Octavia now goes to all of Keanu's movies "every opening weekend because that was a sweet thing to do."