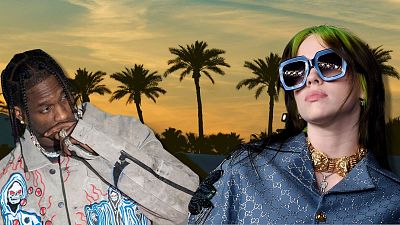 The singer will headline both Saturday nights at the two weekend Californian extravaganza   -   Copyright  AP/James Genchi via Unsplash
By Shannon McDonagh  with AFP  •  Updated: 13/01/2022

After the cancellation of its last two editions due to pandemic, the famous Coachella music festival has replaced Travis Scott from their original 2020 lineup with Billie Eilish.

The rapper was set the headline the festival, which takes place annually across two weekends in the California desert, but is now absent from its updated poster.

Whether the removal is down to Coachella's organisers or his team remains to be seen.

Scott is in the thick of the reputational and legal fallouts from last year's Astroworld' festival disaster. Ten lives were lost in a crowd crush and an inquiry is underway.

At 20 years-old, Eilish's impending performance will make her the youngest headliner in Coachella's history.

The same can be said for the singer's much-anticipated appearance headlining Glastonbury two months later.

Billie is headlining @Coachella 2022 on Saturday, April 16th and Saturday, April 23rd! She will become the youngest headliner ever in the festival’s history. pic.twitter.com/Xi70zLCB8V

One of the world's biggest music festivals, Coachella was last held in 2019 with cancellations in 2020 and 2021 due to the COVID-19 pandemic.

Then just 17-years-old, Eilish performed at the last edition of the festival to come to fruition. Her 15-song set received praise across the board and cemented her position as the "future of pop" in the eyes of critics and fans.

Scott isn't the only artist omitted from the new lineup and attendees have expressed both joy and disappointment on social media at the reshuffling of some acts.

Among the dozens of artists invited to the Valley, ticket holders can expect to see Megan Thee Stallion, Stromae, Doja Cat, girl in red, and Italian Eurovision winners Måneskin.

got my coachella refund 2 years in a row just for harry to now decide to headline….. harry you are a sick sick man

THANK GOD I got my refund to Coachella, I’d be punching the air rn at a lineup of artists I’ve seen multiple times 😭

Organisers confirmed last summer that the open-air festival would return over the weekends of April 15-17 and April 22-24 this year.

Its organisers hope to be able to run it at full capacity, welcoming 125,000 festival-goers each day.

If President Joe Biden's current health measures are still in effect in April, festival-goers will have to provide proof of a full vaccination or a negative test within 72 hours.

The same will apply to the country's other famous festivals planning a return in the US.

Bonnaroo, scheduled for June 16-19 in Tennessee, also announced its lineup this week, including The Chicks, Tool, 21 Savage, Roddy Ricch and Stevie Nicks.

The festival, originally scheduled for September, had to be cancelled after floods ravaged the area it is held in Tennessee.

Eric Gill statue row: Should we remove art made by sexual predators?