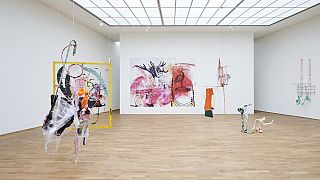 The Republic of Indonesia currently has a population of over 270 million people, making it the fourth most populated country in the world.

By contrast, the Netherlands lies somewhere around 69th on that list (depending on the particular estimates used for similarly sized nations), with a population of less than 18 million.

Despite the considerable difference in scale between the two countries, much of Indonesia was a Dutch colony for hundreds of years, with the Netherlands not recognising its independence until 1949.

That the colonial period extended beyond the end of the Second World War — ending only four years before Elvis Presley made his first studio recording — is a stark reminder of how close the era is to us in history, and how we still live in a world shaped by its impact.

Exhibitions that confront Europe's dark past

On 11 February 2022, the Rijksmuseum in Amsterdam will open 'Revolusi! Indonesia Independent'.

Running until June, the exhibition explores the struggle for independence in Indonesia, through a display of over 200 objects spanning artwork, artefacts, documents and photography.

Focused on the individual stories of people who experienced a protracted and violent conflict, the show is one example of how the European art world is increasingly programming content that explores the relationship between Europe and the outside world, with a particular emphasis on the colonial legacy.

In 2021, for example, the Rijksmuseum staged 'Slavery', its first major exhibition dedicated to the subject, examining the way in which enslavement is “inextricably bound up with Dutch history.”

The exhibition revealed a willingness to discuss topics that, for too long, had been left under a veil, including confronting the provenance and meaning of items in the institution’s own collection.

How art will challenge colonial narratives in 2022

From 18 June to 25 September 2022, another convergence between Europe and Indonesia will take place in Kassel, Germany, in the form of 'documenta 15', the latest edition of one of contemporary art’s most influential recurring events.

Under the artistic direction of ruangrupa, a Jakarta-based collective of artists and creatives, 'documenta 15' will revolve around the Indonesian concept of ‘lumbung’, a word that refers to a communally managed rice barn and evokes ways of “working and living together”.

While ruangrupa bring their egalitarian approach to Kassel, a few hundred kilometres to the south east the second instalment of the 'Biennale Matter of Art' will take place in Prague from 21 July to 23 October 2022.

Launched in 2020 by the independent traznit.cz, part of the wider network of tranzit organisations in central and eastern Europe, the 2022 edition will “examine historical relations between Eastern Europe and the Global South and the repercussions these histories have had on the cultural institutions in the region.”

Indicative of a new readiness to ask difficult questions, the Biennale aims to build “on current discussions about how to address the historical entanglement of art museums in Eastern Europe and their collections in the global colonial relations.”

The practice of individual artists

A parallel to the way in which big events are turning their attention to colonial narratives — and the dissection of troubled pasts that still reverberate in the present — can also be found in the practice of individual artists.

In January, for example, London’s Camden Art Centre will present a newly commissioned installation by the French-Caribbean artist Julien Creuzet. Born in one of Paris’ banlieues, Creuzet grew up on the Caribbean island of Martinique and is now back living and working in the French capital.

The introductory text to the Camden Art Centre exhibition (which takes place 14 January to 13 March) notes that Creuzet’s practice shines “a light on collective social realities of the Caribbean diaspora, focusing on the troubled intersection between Caribbean histories and the events of European modernity.”

With the installation set to include sculptures that reference the insignia on the flags of post-colonial Caribbean nations, the text adds that the work will exist “in deliberate dialogue with the space of the gallery as well as the social and political context of London, in particular the cultural heritage of the Caribbean diaspora and its continuing influence on British culture…”

That dialogue will include a collaboration between Creuzet and London-based singer-songwriter anaiis to create a soundscape for the exhibition that will draw on anaiis’ engagement with “ideas of liberation, empowerment and the reclamation of freedom.”

Just as indigenous peoples and representatives of the global South were prominent attendants at the recent COP26 climate summit in Glasgow, artists are also increasingly employing a post-colonial lens in their approach to the climate crisis and questions of environmental justice.

In February, for example, the 'Rooted Beings' exhibition (until 29 August) at the Wellcome Collection in London will include “five futuristic totems” by Chilean artist Patricia Domínguez that feature botanical reproductions “honouring the narratives of violence and healing embodied by the displayed material.”

With the exhibition looking at themes of “colonial violence and indigenous knowledges”, also on display will be drawings by Joseca, a Yanomami artist from the Amazon rainforest.

The trend of vibrant engagement, with issues revolving around post-colonialism, decolonialism and contested histories can be expected to continue when the Biennale Arte 2022 — the 59th International Art Exhibition — opens in Venice in April.

Among a number of national pavilions and projects touching on such themes will be the French Pavilion, with an exhibition by Zineb Sedira, a Franco-Algerian artist known for exploring North African subjects and France’s colonial legacy.

Also in Venice, Scotland will present a collateral exhibition of new work by Alberta Whittle, commissioned by the Scotland + Venice initiative.

A partnership between various Scottish cultural and governmental bodies, Scotland + Venice noted in announcing the commission that Whittle’s practice “draws on her research into the African diaspora and the decolonisation of Western histories. Major themes include colonialism, xenophobia, climate change and the global pandemic.”

Work by Whittle, who was born in Barbados and now lives and works in Glasgow, can currently be seen in the exhibition 'We Are History' at London’s Somerset House (until 6 February 2022). With the timely subheading, 'Race, Colonialism and Climate Change', the exhibition’s curator Ekow Eshun has explained that it sets out to preference “perspectives from the global South”.

Such broadening of viewpoints, combined with an openness to the notion of interconnected narratives, can be expected to feature prominently in the year ahead.