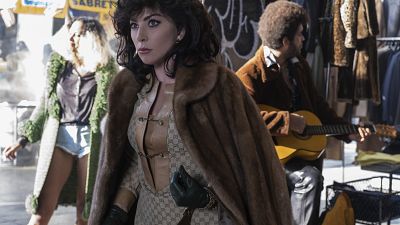 Lady Gaga will be a ocntroversial nominee after. her Italian accent in "House of Gucci" was greeted with bemusement in some quarters   -   Copyright  Fabio Lovino/AP
By Tim Gallagher  with AP  •  Updated: 13/01/2022

The SAG nominees have been announced with stars including Will Smith, Lady Gaga and Ben Affleck getting a nod from the Screen Actors Guild.

In a year in which the Oscar race is again missing in-person glitz, nominees for the 28th SAG awards were announced on Instagram live by Vanessa Hudgens and Rosario Dawson.

The virtual event shows the continuing impact of the pandemic on the entertainment industry, but the streamed announcement still brought some much-needed glamour to awards season following the damp squib of the Golden Globes.

The Globes - normally the kick-off of the annual Oscar race - were widely boycotted by Hollywood this year after controversial racism and corruption allegations.

It was announced that the casts of "Belfast" and "CODA" will fight it out with Ridley Scott's high-camp "House of Gucci," and controversial apocalypse comedy "Don't Look Up" for the guild's top award; best ensemble.

Best actor noms went to Hollywood royalty Will Smith for his part as the ambitious father of Venus and Serena Williams in "King Richard,”and Benedict Cumberbatch for his turn as a sadistic cowboy in “The Power of the Dog”. The pair are joined by Denzel Washington for "The Tragedy of Macbeth", Andrew Garfield in "Tick, Tick ... Boom!" and Javier Bardem in "Being the Ricardos".

In the top category for best female lead are Lady Gaga for her controversial turn in "House of Gucci" and fellow singer-turned-actress Jennifer Hudson in Aretha Franklin biopic "Respect".

Another biopic best actress nomination came for Jessica Chastain in "The Eyes of Tammy Faye", meanwhile Olivia Colman is nominated for her part in "The Lost Daughter" and Nicole Kidman joins her for "Being the Ricardos".

Making history at the SAG awards

History was made when Troy Kotsur was nominated for best supporting actor in “CODA”, Kotsur is the first deaf actor to be nominated for an individual SAG award.

Reacting to the news the actor said he was glad that deaf actors are starting to get recognition, and that audiences can "finally realise that this is how it should be."

The SAG Awards, presented by the actors guild SAG-AFTRA, are among the most reliable Oscar bellwethers. Seldom does a movie or performance not nominated by the screen actors end up winning at the Academy Awards. Actors make up the biggest percentage of the film academy, so their choices have the largest sway.

Some will be shocked that Kristen Stewart was overlooked for her portrayal of Princess Diana in “Spencer”, and there will be disappointment that popular films "Spider-Man: No Way Home," "Dune" and "No Time To Die" received no major recognition.

However Netflix sensation “Squid Game” was nominated for four SAG awards including best drama series, proving that viewer numbers do mean something for the guild.

The series' star Lee Jung-jae said he felt an "electrical shock" when his name was announced among the nominees. A veteran of Korean TV and film, he's laughed off U.S. media questions about overnight success.

The television nominations were also led by HBO's "Succession"; "Ted Lasso,” and "The Morning Show".

Which European nations are cracking down on their cultural sectors?