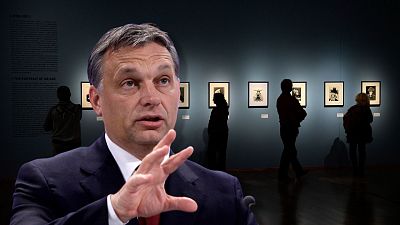 Are Poland and Hungary's political structures reshaping their art before our eyes?   -   Copyright  AP/AFP
By Richard Unwin  •  Updated: 31/12/2021

As far as election slogans and vote-winning policies go, art and culture are rarely high on the political agenda.

While those in the arts often lament the sense of being politically out of sight, out of mind, the flip side is that too much governmental attention can quickly start to feel suffocating.

The right-wing governments of Hungary and Poland, the current bêtes noires of the EU club, have both drawn criticism in recent years for unduly interfering within their respective arts scenes.

Such interference has often been overshadowed by more high-profile battles – controversial media laws and the rights of minorities – but the arts have nonetheless become increasingly entangled in the contested political landscapes of the two countries.

The outcome of this could be damning. Here's why.

Government intervention is spelling trouble for Poland's galleries and museums

Europe's clash between politics (or rather politicians) and art is most heated in Poland.

Right now, the ruling Law and Justice party (PiS) is been accused of systematically replacing the heads of leading museums and arts institutions with political appointees whose views are in line with its wider cultural and political agenda.

Framed as a contest between a left-leaning, liberal art world and the conservative, staunchly Christian values of the government, those on the side of art appear to be losing.

The Law and Justice party has been accused of systematically replacing the heads of leading museums and arts institutions.

Polish visual art institutions that have recently seen or are awaiting an imminent change of leadership include the Ujazdowski Castle Centre for Contemporary Art in Warsaw and the Łódź Museum of Art.

On 1 January, perhaps the most controversial of all the recent changes is set to be completed when Janusz Janowski – a painter and arts trade union leader – takes control of the Zachęta National Gallery of Art in Warsaw.

Expressing shock and outrage when his apportionment was announced in late 2021, many Polish arts professionals were particularly unflattering in their dismissal of Janowski’s suitability for the role.

In an article written in December for Art in America, the art historian and curator Magdalena Moskalewicz argued that the appointment was an “affront to the Polish art scene”.

Janowski, Moskalewicz added, “is a truly terrible painter” and while that may not preclude his leadership potential, she acknowledged, he has “never run an institution of this scale, and he demonstrates no expertise in contemporary art.”

Holding a collection of over 3500 modern and contemporary artworks, Zachęta is responsible for the country’s participation at the Venice Biennale, and has, until now, been regarded as something of a progressive beacon.

And yet, Poland’s Ministry of Culture remain firm in their decision.

Those inside the Polish art scene privately express that they now feel “helpless and hopeless”.

A statement explaining Janowski’s selection noted that he was a “painter, theoretician and historian of art, curator, jazz musician, doctor of humanities, [and] member of the Polish Philosophical Society” with extensive involvement in regional visual art organisations and exhibitions dating back to 2004.

Other commentators, though, have mirrored Moskalewicz’s sentiments, condemning the fact that Janowski – who they regard as a conservative traditionalist – is now set to lead what is arguably Poland’s leading venue for contemporary art.

Decrying what they regard as an overarching “ideological takeover” by the government, those inside the Polish art scene privately express that they now feel “helpless and hopeless” mired in what they say is “a sad, tragic time for Polish visual art.”

Meanwhile, in Hungary, the ambitious but controversial Liget Project is moving forward in its transformation of both the physical landscape of Budapest’s City Park, as well as the cultural offering of the city as a whole.

The project is the brainchild of László Baán.

A respected figure in the international art world, Baán is the longstanding director of Budapest’s Museum of Fine Arts, an institution home to one of central Europe’s most important collections of fine art, that has repeatedly staged major exhibitions of work by artists such as Rembrandt, Rubens, and Cézanne.

Heavily backed by Hungary’s governing Fidesz party and Prime Minister Viktor Orbán, the Liget Project has always been politically sensitive and has undergone a number of changes since its original conception.

Heralded on nationalistic lines by Orbán as an undertaking that can bring “glory” to Hungary, criticism of the project has often been focused on the perceived negative impact it will have on the City Parks’ green spaces.

Responding to protesters who have campaigned against the removal of trees and the construction of large buildings within the park environment, the team behind the project have always argued that its green areas are being enhanced and expanded, pointing to the fact that an elaborate children’s play area and sports facilities have also been added.

Objections to the project, though, have never gone away, particularly from city and opposition politicians.

Nevertheless, the Liget Project has followed through in meeting a number of milestones, including completing a new National Museum Restoration and Storage Centre on the site of a former hospital in 2019.

With that facility acting as an essential resource ready to serve the new museums planned for the wider project, as well Budapest’s existing institutions, it is now set to be followed in 2022 by the opening of the House of Hungarian Music, designed by Japanese architect Sou Fujimoto, as well as a landmark new Museum of Ethnography.

As things stand, however, the centerpiece of the entire project, a planned New National Gallery – designed by Japanese architecture practice SANAA – is currently on hold, following objections raised by Budapest’s mayor, Gergely Karácsony.

An opponent of Fidesz, Karácsony was elected in 2019 on a green platform and quickly moved to halt work on the Liget Project that had not yet broken ground.

Though he withdrew from his prime ministerial run against Orbán earlier this year, he remains a staunch adversary to any more museums being built inside the City Park.

While Baán says that the necessary authorisation and licences remain in place for the €250 million New National Gallery to be completed, its realisation has been stalled, pending further political negotiations.

With parliamentary elections set to be held in the spring, it seems that such discussions will now wait until after Hungarian voters have cast their votes.

Beyond the realm of art, those elections, as well as broader tensions in both Hungary and Poland, will be followed closely by observers keen to understand what impact they are likely to have on the European political map.

While artistic concerns may again drop down the agenda, then, there is little likelihood of them becoming less entangled in politics any time soon.