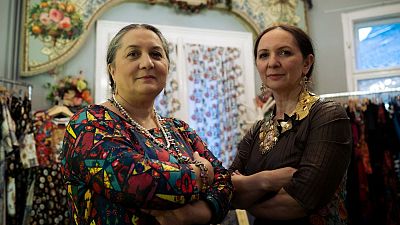 Two sisters from Hungary’s Roma community are taking this design studio to new highs to spotlight their heritage and culture.

Romani Design is the creation of sisters Erika and Helena Varga with the aim of reestablishing Roma culture in a modern context.

The fashion space – first set up in 2010 – challenges the centuries-old stereotypes faced by the country's Roma minority, and asserting a place at the table of high culture for the historically marginalised group.

"We were one of the first brands that actually gave the answer to how to rebuild (Roma) traditions in a contemporary, modern way," said Erika Varga, co-founder of Romani Design.

The Roma are Hungary's largest minority, and represent as much of 10 per cent of the population in the Central European country.

Like their counterparts throughout Europe, Hungary's Roma are often the subjects of social and economic exclusion, and face discrimination, segregation and poverty.

Present in Hungary since the 15th century, many of the Roma's traditions are deeply ingrained in broader Hungarian culture.

Yet many of their unique customs and occupations — as well as their language, Romani — have been slowly dying out after centuries of marginalisation.

Before starting Romani Design, the Varga sisters worked as jewellery makers and designers.

They started Romani Design in response to concerns for their vanishing traditions, and exclusion from so-called ‘high culture’.

"We wanted to sensitise the social majority, including the social elite," Erika said.

Helena, the younger of the sisters who oversees the design of their products, said many of the dresses and accessories are reflections on lived experiences she has had through growing up Roma in Hungary.

"When I design, I absolutely live my own Gypsy identity, and my roots are absolutely here in my heart and soul," Helena said, using a term for the Roma seen as pejorative in some places but commonly used by Roma in Hungary.

"I've seen how (Roma communities) live, what they wear, what kinds of houses they live in and what the interior design is like ... These memories and experiences are completely embedded in my mind when I design something."

Advocating for Roma Rights in the modern day

While some advocacy groups in Hungary push for Roma equality and social inclusion by representing elements of Roma culture like folk music and dance, the Varga sisters say that fashion is one of the most powerful means of bridging the gap between their culture and the rest of society.

"Fashion, the way we dress, the clothes we wear on our bodies can send a message so fast and so intense that it reaches its target audience very, very quickly," Helena said. "It's very effective."

In the world of designer couture, choosing to shop at Romani Design represents a conscious statement of values, Helena said, and their clients usually buy their products with the intent of expressing their views on inclusion.

Most clients of the studio are "people who want more from fashion," Erika says.

"They want to be able to express their personality as much as possible, to shape their immediate environment, and at the same time to represent values that are important in their personal lives and communities, such as the values of multiculturalism," she said.

Six dresses by Romani Design are currently on display at an exhibition in the Museum of Applied Arts in Hungary's capital, Budapest.