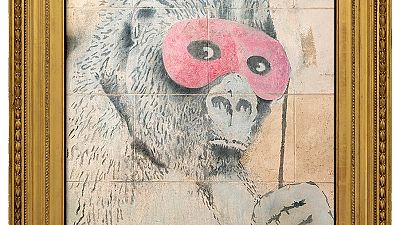 "Gorilla in a Pink Mask" is to be broken up and sold as NFTs in cross over between virtual and real life art   -   Copyright  Banksy/Exposed Walls
By Richard Unwin  •  Updated: 31/12/2021

In September 2020 a piece of graffiti by Banksy, known as ‘Gorilla in a Pink Mask’, was removed from a wall in Bristol, England.

Having extracted the mural in its entirety - including the outer piece of wall on which it was spay-painted - Exposed Walls, the company behind the removal, is now set to ‘sell’ the artwork. Rather than offering one person the opportunity to take possession of the physical piece, however, ‘Gorilla in a Pink Mask’ will be fractionalised into 10,000 parts, each of which will be sold as an NFT for around €661.

With the NFT edition open to purchase from 12 January 2022, Exposed Walls hopes buyers will be further enticed by the chance of winning another Banksy mural; ‘Refugees’, will be given away to one lucky individual once the edition has sold out.

Interestingly, the winner will have the choice of whether the ‘Refugees’ prize comes in the form of a one-off NFT, or the physical artwork itself.

While the fractionalised sale of ‘Gorilla in a Pink Mask’ is an indication of how the current NFT craze is beginning to extend beyond purely digital artwork to also embrace physical, real world objects, the choice that will be presented to the eventual winner of ‘Refugees’ is a useful reminder of how NFTs have the power to undermine traditional art world assumptions.

Year of the NFT

2021 saw the non-fungible token (NFT) have its major breakthrough into both popular culture and the art world establishment. Christie’s made headlines in March through its New York sale of the NFT “Everydays: The First 5000 Days” by digital artist Beeple for $69 million (€608 million). The first purely digital artwork Christie’s had ever sold, the NFT had a starting bid of only $100 (€88) but skyrocketed to become the most expensive artwork ever sold online.

Meanwhile, in October, the competing auction house behemoth Sotheby’s launched its dedicated NFT marketplace, Metaverse, achieving over €88 million in sales before the end of the year. Such accomplishments, as well as the broader adoption of NFTs across celebrity and brand culture, led to the UK’s Collins Dictionary selecting the abbreviation as its word of the year.

Many art market commentators expect the NFT bandwagon to further accelerate in 2022. The high-water mark sale of “Everydays” may be difficult to top, but that sale coupled with purchases of other individual NFTs for many millions, means all bets are off in regard to what these digital, blockchain-registered certificates will achieve next.

Existential threat or saviour from on high?

Alongside the staggering sales figures, the rapid rise of NFTs has raised questions about where value lies in art, the nature of ownership, the desire to possess unique assets, and the correlation between digital and physical realms.

Speaking to Euronews about how the relative value of Banksy’s real life “Refugees” mural might compare to an NFT version, a spokesperson for Exposed Walls said, “The value of a unique NFT might well have more value than the physical object, but that is down to the owner. If they choose to market it and sell it as a one-off by auction on a platform like Opensea it could exceed its value as a physical object within the blockchain community. That said, these [physical] street murals look set to rocket in value. At the moment they trade below their market value, but increasingly they are fetching a lot of money. The answer is, it's hard to say.”

Around the same time that Exposed Walls opens its sale of the ‘Gorilla in a Pink Mask’ NFT edition, the American company Particle will launch a similar sale of 10,000 NFTs from another fractionalised Banksy artwork. In this case a 90 x 90cm, 2005 version on canvas of ‘Love is in the Air’. Particle purchased the physical piece from Sotheby’s in 2021, for almost €12 million and will now sell each of the 10,000 NFT parts for just over €1300.

Turning art into a limited company?

The idea behind the initiatives by both Particle and Exposed Walls is that buyers of the NFTs will own a piece of the physical artworks, which the companies will be responsible for and intend to show publicly. Both companies will retain 1% of their respective NFT editions, so that no single buyer takes overall control of the artworks involved.

With other companies, like Masterworks, already offering investors the opportunity to buy and sell blockchain recorded shares in individual pieces by blue-chip artists, such new models of ownership are likely to become increasingly prevalent. The positive spin on such vehicles is that they will bring more liquidity into the art market, offering artists innovative ways to monetise their creative output, while a larger pool of people will have the opportunity to invest.

One example of a project working with artists on an individual level is Surfing NFT, an initiative launched in 2021 by the Turin-based art fair Artissima. Supported by Fondazione per l’Arte Moderna e Contemporanea CRT, an Italian foundation and art collection, the project has selected five artists via a committee of international curators. All five artists have received €8000 to fund the production of an NFT-registered digital artwork, with an overall winner set to be chosen at an event in February.

In Berlin, gallerist Johann König, who founded the well-known KÖNIG GALERIE in 2022, recently launched misa.art, an online marketplace that sells both primary (new or previously unsold) and secondary (second-hand) artworks, including digital art and NFTs. The new initiative is also working on its own model of fractionalised ownership, with investors set to be able to buy and sell “fractions” of “top-class works” via the platform.

Noting that the art market has previously been “a conservative industry with progressive content”, König says that “in the last two years” it has seen “a rise like no time before.” The upswing, König suggests, is “due to many reasons”, including the switch to online activity, the increase in inflation during the pandemic, and the fact that collectors, like everyone else, have been spending more time at home, reinforcing their awareness of “how essential” the arts are.

Explaining that people are only starting “to understand the utility power of NFTs” in regard to digital art, as well as “fractionalised ownership and community building”, König believes “that we only see the beginning of the NFT trend. I think this will be accelerated…”

Copyright and climate: the pitfalls of NFTs

As the bandwagon gathers pace, greater scrutiny will also be placed on the potential pitfalls and nefarious effects of NFTs. High among these is the technology’s environmental impact. Most NFTs are currently registered on the Ethereum blockchain, an energy-hungry, proof-of-work platform that has been criticised for its considerable carbon footprint. Already, those employing NFTs in the art world are looking to do so in ways they can claim are less environmentally unfriendly. Particle and misa.art, for example, both use alternative proof-of-stake blockchain platforms that consume considerably less power per transaction.

The ability of NFTs to remonetise old or previously sold artworks also brings with it complex questions about copyright, uniqueness and trust. The substantial rewards someone can now hope to realise by, for example, creating a digital image of an existing real-world artwork and marketing it as an NFT have arguably now created a bigger can of worms.

Nevertheless, with more art world insiders exploring the possibilities offered by NFTs and the money they attract, many share Johann König’s optimism that the technology’s reach will continue to grow.

“It’s a fantastic moment for art because it will make art more democratic and bring more people into the art world,” says the German gallerist.

“This ultimately will result in the fact that more people are able to live from art.”