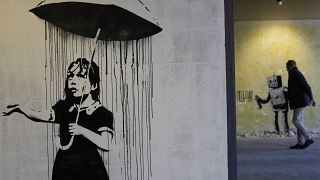 Travellers to and from Milan will now be able to catch a train and enjoy some street art at the same time, as hundreds of copies of murals by British graffiti artist Banksy are on show at the northern Italian city's Central Station.

"The Word of Banksy - The Immersive Experience" exhibition opens today in the Mosaics Gallery, on the rail level of Milan's main train station.

Over 130 reproductions of the works of the British street artist have been recreated by young European artists and installed against backgrounds mimicking their original street setting.

And unlike traditional exhibitions, some of the works are displayed on murals recreated for the occasion.

Famous for dealing with ironic political issues and social criticism, Banksy's art has been recreated in its original size and appearance for an immersive experience.

"What we tried to do by allowing the visitors to discover Banksy's works in a more geographical context, meaning from country to country, from city to city – we allow them to discover his works, almost identical to the originals," said curator Manu De Ros.

"We are not only talking about recreating the stencils in their original sizes, but also recreating the walls on which Banksy actually painted. When it was a brick wall, we made a brick wall, when it is a cement wall we made a cement wall, when they are dirty from time and pollution we made them dirty with special effects. It's really about immersing the visitor and allowing him to be in the world of Banksy through this thematic and geographic journey."

Whether Banksy denounces pollution in 'Season's Greetings', human-made disasters in 'The Umbrella Girl', or even calls for action against concerning droughts in 'Washing Zebra Stripes', seeing the murals in a setting close to how it was intended makes a powerful impact.

The curators asked street artists and art students to help reproduce some of Banksy's most famous street art.

"I used and trusted both types of street artists, some specialised in graffiti, and other more pictorial artists, and together we reproduced both Banksy's pieces and their backgrounds. I also want to say that some students from the Brera academy also helped out and collaborated, they were very good despite their young age," De Ros added.

Some reproductions of Banksy's newest pieces are also on display in Italy for the first time.

These include 'Aachoo!!', which features an older woman, mask-less, sneezing and knocking her dentures off, perhaps a comical take on the COVID-19 pandemic.

Also exhibited for the first time in Italy is 'Steve Jobs', a piece painted near the Calais Jungle, where migrants seeking to reach England live. Banksy posted a picture of it on his website with the caption 'The son of a migrant from Syria'.

The 'Steve Jobs' piece has a couple of holes that allow visitors to glimpse at his interpretation of 'Raft of the Medusa', by 19th-century French painter Theodore Gericault.

"We see very old pieces such as his first murals like 'The Mild Mild West', which was truly one of the very firsts, up to Oscar Wilde who is escaping from the prison in 'Create Escape' on the wall of the prison in which he was locked up," De Ros went on.

The works on display give the viewer the opportunity to reflect on the system and the society in which we live, and a chance to immerse inside Banksy's many different worlds, from England, France, the United States, and the Bethlehem wall.

The exhibition is unauthorised but De Ros noted it has been unchallenged so far.

"We know that exhibitions about Banksy are not authorised by Banksy, on the other hand, he doesn't forbid them, he doesn't stop them from happening, which leads us to think that he could be happy with the work we have done, he may also appreciate the fact that we send out the messages he wishes to send out, and there is also his reputation."

"He probably doesn't need all these Banksy exhibitions to make himself known and send out his messages, but I think exhibitions are a part of it, we bring our part to the Banksy system, and the movement around it."

Located inside a gallery in Milano Centrale, it is an open invitation to travellers.

"This location is very much adapted to this exhibit because it unites the history of the train station, a very beautiful construction from another era, but it is also a street, a fleeting place, someplace you go through and leave, and that is what Banksy is all about, a tradition that unites with modern times," the curator revealed.

The exhibition will be on display until February 27, 2022, at the Galleria dei Mosaici.