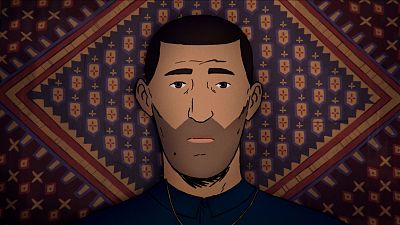 The Dane-produced animated documentary has been called an "instant classic"   -   Copyright  NEON/AP
By Shannon McDonagh  with AFP  •  Updated: 02/12/2021

After winning the Grand Jury prize for global documentaries at Sundance Film Festival almost a year ago, the animated, Danish-produced 'Flee' (Flugt) lands in cinemas this week.

From December 3, households across Europe will have the chance to see what was described by festival jurors as an "instant classic'.

'Flee' tells the story of Amin, a thirty-something academic who has built a life for himself in Denmark after fleeing Afghanistan alone as a a young homosexual refugee.

Amin is happy, settled, with a long-term boyfriend he is about to marry

Slowly, he realises that in order to completely commit to this state of being he must be honest about his traumatic past.

Those viewing the film in English may notice some familiar narrators. Actor and musician Riz Ahmed and Game of Thrones star Nikolaj Coster-Waldau – who both serve as executive producers of the film – will be telling the story when it lands in independent theatres this week.

Jonas Poher Rasmussen is the writer and director of this hybrid documentary, which also went on to win Best Feature Film at the Annecy International Animation Festival in France.

His friendship the real-life 'Amin' that gave him the idea for this project.

“I was curious about his past since I met him when we were 15, when he arrived in my town in Denmark,” he explains.

Initially, Amin did not want to talk about what he had been through, fearing for his status as an asylum seeker but also to be seen as a victim. It was in 2013 that the director, specialising in documentaries for the radio, had the idea of ​​translating the interviews with his friend on the big screen, in the form of an animated film.

"In this way, he can share his story and still meet people without suffering from preconceived ideas. These people will not know his innermost secrets, his traumas."

'Flee' is a trauma-heavy endeavour. In it we feel the strain of Amin's childhood, full of grief and political conflicts.

Real archive footage from that time – included in the documentary – is eerily reminiscent of the Taliban capture of Kabul this summer.

"It has unfortunately become topical all at once," says Rasmussen.

And from Denmark, the real-life Amin witnessed the sad spectacle of "a new generation of Afghans being pushed out of their country and who will find themselves in the same hell, possibly even worse."

Thousands of refugees risk their lives to never make it as far as Amin.

In a poignant sequence represented by minimalist sketches, Amin's sisters find themselves trapped in a suffocating container as they seek to reach Scandinavia aboard a cargo ship crossing the Baltic Sea.

Amin himself will later make this crossing on an overcrowded boat taking water from everywhere but will be intercepted by the Estonian coast guard.

According to Rasmussen, this use of animation "seemed to some extent more honest" than employing actors to play the police officers arresting migrants.

“In a more surreal way, it's good to immerse yourself in (the character's) emotions, to show your terror, because that's really what happened there,” he says.

The director was inspired by 'Waltz with Bashir', an Israeli animated film dedicated to the testimony of former soldiers who took part in the Lebanese war in 1982.

Looking at it, he had found it easier to follow a story without seeing real "faces in pain".

"These moving images as intermediaries meant that I didn't hold back what I was seeing, as I probably would in normal times."

Animation also helps introduce a dose of humour to tragic events, for example when Amin remembers the pink walkman he listened to pop on when he was young in Kabul, which gives a sequence of pencil sketches reminiscent of the famous A-Ha music video, 'Take on Me'.

Jean-Claude van Damme and Bollywood stars, the young boy's secret loves at the time, winks at him from posters or screens.

"You have the right to laugh with him, to laugh at him," said the director, who hopes to retrace the story "of a human being who, at one point in his life, had no control over what he was doing."