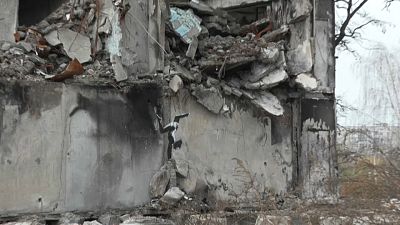 The elusive British street artist Banksy has unveiled his latest work -- a gymnast drawn onto a bombed-out building in Borodyanka, on the outskirts of Kyiv.

The piece appeared on the artist's Instagram, with the caption "Borodyanka, Ukraine."

The work, stenciled on the wall of a war-damaged building in Borodianka, a town a few kilometres northwest of the Ukrainian capital that has become a symbol of Ukrainian resistance to Russian bombing, depicts a gymnast balancing on the rubble.

Borodyanka had been occupied by Russian forces until April and was heavily damaged by fighting in the early days of Moscow’s invasion.

A number of Banksy-style stencil drawings have recently appeared in and around Kyiv, fuelling speculation that the artist may be working in the war-torn country.

Another stencil drawing, which Banksy has not confirmed at this stage, shows a child knocking down a man in judo gear -- one of Russian President Vladimir Putin's favourite sports.

A third mural, which Bansky did not confirm was his, was spotted in Irpin, another heavily bombed district that has become emblematic of Kyiv's suburbs.