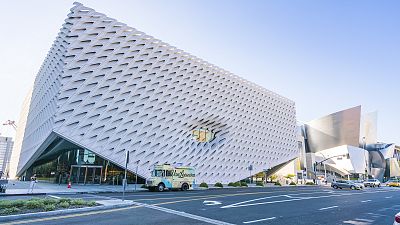 With international travel on pause, social media has now, more than ever, become a looking glass onto the wider world. From virtual tours to digitised collections being made available online, art galleries and museums around the globe have given us a taste of what's waiting for us in a post-pandemic life.

Instagram, in particular, is helping to slake our thirst for art and architecture, taking us on leisurely ambles around airy gallery spaces without breaking current pandemic restrictions. Here are some of the best galleries in the world, which have become some of the most virtually visited thanks to social media.

Home of Da Vinci’s Mona Lisa, not to mention cavernous galleries adorned with works by the masters Carravagio, Michelangelo, Raphael, Rubens, Delacroix and Rembrandt, the world’s largest museum attracts more than 10 million visitors a year. With its doors closed because of the pandemic, the Louvre's corridors and spaces are eerily quiet just now - but it does mean that curators and restorers have had time to carry out much-needed renovation work in the absence of the museum's nearly 40,000 daily visitors in normal circumstances.

In a city packed with must-see attractions, a visit to the Museum of Modern Art - or MoMa - in Manhattan is usually near the top of any New York bucket list. Its gallery spaces have been home to some of the world's most avant-garde contemporary art since 1952, with works by Pablo Picasso, Andy Warhol, Frida Kahlo and more hanging on its walls. Not to be missed is Van Gogh's famous The Starry Night which will have you transfixed for hours.

A powerhouse gallery set in a former power station on the banks of the Thames, the Tate Modern - one of a quartet of Tate galleries in London and Liverpool - draws art lovers from across the world. If its location wasn't enough to have your camera snapping (the dome of St Paul's visible across the river from it), the collection of British and international modern artworks will. Its cutting-edge temporary exhibitions are always a real highlight, for instance installations by artist Olafur Eliasson who, exploring the theme of climate change, brought blocks of glacial ice from Greenland to London.

One of the world's most influential art institutions, the Met - as it is known by its shorthand - is a must-visit in New York. Over two million artwork and artefacts in its collection, you could lose days of your life delving through galleries which play host to antiquities from ancient civilisations to contemporary art and everything in between. Situated on Fifth Avenue, the museum is also just a stone's throw from the urban oasis of Central Park.

With its exposed pipes and vibrant colours, the exuberant facade of the Centre Pompidou proudly stands out from the elegant Parisian apartment blocks that surround it. As well as flocking to its exhibition spaces, visitors to the City of Light head for the gallery's rooftop to drink in the skyline views of Paris punctuated by the Veille Dame herself, the Eiffel Tower. A Mecca for modern art lovers thanks to masterpieces by Chagall, Matisse, Kahlo and Dix, the gallery also boasts impressive collections of photography and visual art.

Designed by Canadian architect Frank Gehry, the Guggenheim in Bilbao makes such a statement that its instantly recognisable the world over and has put its home city firmly on the cultural map. Over four million visitors flocked from around the globe to the Basque Country in its first three years alone. Come for the 250 artworks by Spanish and international artists on permanent display, stay for the architecture and Pinxtos, the region’s mouth-watering tapas.

A relatively new kid on the block, The Broad opened in downtown LA in 2015 to house one of the most significant collections of post-war contemporary art compiled by two philanthropists Eli and Edythe Broad. Admission to the blockbuster gallery, dubbed "the veil and the vault" because of its design which incorporates both exhibition space and storage, is free for all visitors and has already established it as one of the world's top art institutions.

The Musée d'Orsay is one of those galleries which is as much a showstopper for the treasures on display behind its doors as the beautiful building which houses them. Occupying a former Beaux-Arts era railway station on the Left Bank of the Seine, you'll be torn between looking high above you at its impressive vaulted ceiling and the sculptures by Rodin and masterpieces by Monet and Cézanne.

A pantheon dedicated to Dutch masterpieces by the likes of Rembrandt and Vermeer, the colossal Rijkmuseum in Amsterdam is claims the prize of being the Netherlands’ largest art museum and is one of the country's most visited attractions to boot. The museum reopened in 2013 after a massive restoration project costing €375 million, throwing open its doors for the public to see its 8,000-piece collection after 10 long years.

Only surpassed by the Louvre in terms of gallery space, the regal Hermitage occupies several buildings along an embankment on St Petersburg's River Neva, including the Winter Palace, the crown jewel of Russia's imperial residences. As well as the largest collection of paintings in the world (you'd need to set aside six years to spend just a minute admiring each one), the building will seduce your camera phone's lens with its 24 kilometres of opulent, sweeping rooms.