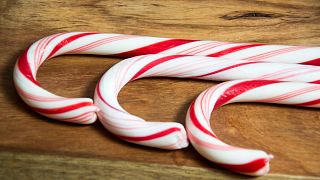 Swedish bakers in the village of Gränna are hard at work making peppermint sticks, or 'polkagris' as they're known in Swedish.

The small town is dedicated to the production and distribution of the delicacy, which has become a symbol of Christmas worldwide.

The sugary treat was invented in 1859 by Amalia Eriksson, an impoverished local widow.

To begin with, she was the sole producer of the festive candy, and her bakery quickly became well known in the town, and elsewhere.

In 1915, her bakery was even visited by Crown Prince Gustaf Adolf and his wife Margaretha.

She kept the recipe secret, and it was only released upon her death in 1923, at 99 years of age.

Soon others began to use her recipe, and now there are a dozen polkagris bakeries that line the main streets of the town, Brahegatan.

The hot sugar paste is then dumped onto a cooling table, where colouring is added to small pieces that are separated out and set aside.

Once the dough has cooled down, the peppermint flavouring is added and the dough is stretched with a puller to let in air, which gives it its texture and a white colour.

The dough is then rolled and twisted until it becomes long and thin.

While the dough is still soft, it can be cut and shaped into a variety of forms.

Today, polkagris remains a symbol of Gränna, as well as being one of the most popular Swedish souvenirs.

Where are the most iconic Christmas trees around the world?