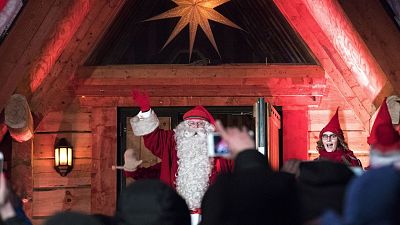 Santa Claus is preparing for his global gift-giving trip in snow-covered Lapland, on the edge of the Arctic Circle.

As with last year, his task has been made more challenging by the pandemic. Luckily for everyone, Saint Nick has been granted 'key worker' status, so there'll be no need for any 'elf isolating'.

Santa Claus Village is sat on the edge of the Arctic Circle, about eight kilometres north of Rovaniemi, the capital of Finnish Lapland.

At this time of year, the sun doesn't rise till around 11am, but that doesn't stop Santa and his trusty elves busily making their final preparations for Christmas Eve.

Santa says the elves have been working hard, while Rudolph has been on vacation

"Christmas preparations are going quite well at the moment. It's only a few days till Christmas now, the elves have been working very hard, as always," he says.

With Santa's list almost complete, it's now possible to say whether children have been naughty or nice during 2021.

"I think people have been very good for 2021, especially the children," he says.

According to local tourist board Visit Rovaniemi, over half a million people typically visit the Christmas-themed destination every year to meet Santa, play in the snow and get in the festive spirit.

That all changed last year, as coronavirus lockdowns and travel restrictions scuppered many people's travel plans. Just over 11,000 tourists visited last December, only 1,100 from overseas.

International tourists are back and enjoying the festive atmosphere

"It's the Christmas season, and we are very excited for being here in Lapland because I'm 48 and it's my first time here, and I wanted to visit Santa Claus," says Manuel Perez, visiting Santa Claus Village from Madrid, Spain with his 8-year-old daughter Olivia.

Santa is keen to point out that if families do face restrictions this year, households can still have fun together.

"I know there has been lockdowns and everything, and people have been together at the houses, but I wish that people should do things together more. Not isolate in their own rooms but do something together."

A busy time for Santa and his little helpers

For those who can't meet Santa in person, there's always old-fashioned mail.

In the village's nearby post office, Santa's elves are busily sorting through thousands of letters sent from around the world.

The post office receives about half a million letters and wish-lists every Christmas. At peak times, it can rise to over 30,000 letters a day.

'Elf' Katja says the most mail comes from Finland, Poland, China, Japan, the U.K., and Italy. She says children are asking for Lego toys, books, puzzles, and other things:

"There have been wishes for clothes, for certain clothing, candies always wishing candies. And then, there was actually, I just read a wish for Santa, where some kid wishes that the pandemic will end soon," she says.

"We have a long trip ahead, lots of nice, good children waiting for us," he says, as he rides off on his sleigh.

Check out the video above to see Santa and his festive preparations in Lapland.