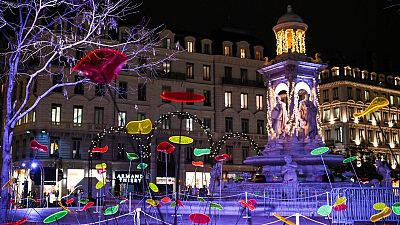 The spectacular Festival of Lights (Fête des Lumières) kicked off in Lyon on Wednesday, lighting up the entire city at night as public buildings, town squares, parks, and even lakes become canvases for works of art for four magical evenings.

Ever since Lyon was founded in 43 BCE, light has held a special place in the city, and each year on December 8, this special connection radiates throughout.

Every year, the festival reconnects with its beginnings dating back to the middle of the 19th Century, through temporary light installations illuminating entire districts of the city and transforming the Renaissance facades of Lyon's majestic buildings into a show of lights.

In 1852, against a backdrop of social unrest, recurring floods, and radical urban change, a decision was taken to erect a statue of the Virgin Mary on the hill of Fourvière, with the inauguration scheduled for September 8, the date of the traditional procession of Aldermen.

However, intense flooding delayed the delivery of the statue and the event was postponed to December 8, for the Feast of the Immaculate Conception.

But once again, official ceremonies had to be abandoned due to inclement weather.

Seeing the weather improve as night fell, the citizens of Lyon spontaneously placed lit candles on their window sills and balconies, as a symbol of the people coming together in a spirit of solidarity.

In the 1960s, shop-window illumination competitions, especially among food shops, continued this tradition in a new form.

They marked the start of the Christmas season and illuminated the religious celebrations of December 8.

Then in 1989, the city added a new chapter to its history thanks to an avant-garde public lighting policy, the first 'Plan Lumière', during which the city illuminates its heritage sites.

Lyon was the first European city to launch such a project.

The lighting gradually began to take on more meaning – light embellished the squares, streets, bridges, riverbanks, and rivers themselves, pushing Lyon out of the shadows.

The tradition continued over the following decades and now the rest is history.

This year's edition of the festival wants to be more inclusive for all generations, with organisers focusing on young creators.

"This year, we put the focus on young creators. 60% of the artists who present their artwork at the Fête des Lumières are new participants," the mayor of Lyon, Grégory Doucet, told Euronews.

All in all, 27 places across Lyon form part of the backdrop for 31 sound and light performances.

Architect Jérémie Bellot was supposed to take part in the festival for the first time last year, but the vast majority of the programme was cancelled due to the coronavirus pandemic.

"We benefited from this time to think and ask ourselves about our relationship with society, about our take on reality and to offer an artwork which has evolved during these past two years and which is presented now in its best version," Bellot said.

The Festival of Lights will take place this year despite the ongoing pandemic, and amid fears of the new COVID-19 variant Omicron.

Facemasks and sanitary passes will be mandatory for indoor installations.

But organisers want visitors and residents to rest assured - the show must and will go on.