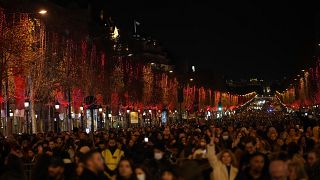 After missing out in 2020 due to the health crisis, thousands of Parisians and visitors gathered in the French capital on Sunday night to admire the splendid illuminations of the Champs-Elysées.

The world-famous boulevard's Christmas lights were switched on by French pop star Clara Luciani, the godmother of this 2021 edition.

The 400 or so plane trees were decked out in lights during the ceremony.

Alongside the young musician stood Paris mayor Anne Hidalgo and other top officials.