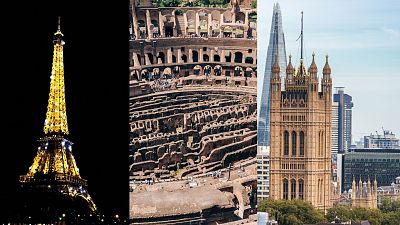 Becoming a city in Europe is weirdly complicated.

Though organisations like the OECD have done their bit to try and harmonise the idea in recent years, each country has very different definitions of what qualifies as a city.

It's hard to cross-compare what unites Paris, Rome, and London, when they are all so drastically different? Some countries define city status by population size, others on historical buildings and values.

This century's definition states that cities in Europe have well-connected urban centres, with a surrounding "commune" that allows people to travel in and out of them.

But that doesn't encompass individual processes that have allowed us to understand our cities for centuries.

We've dug into what defines a European city from country-to-country. Here are some cool examples.

It’d be sacrilege to write about the classification of cities in Europe without mentioning Greece.

Greece’s relationship with cities all boils down to history. Athens is one of the world’s oldest cities, its antiquity spanning over 3,400 years.

The word ‘city’ actually derives from the Greek word ‘polis’, which is how our language has evolved into using descriptors like ‘metropolis’ - metropolitan areas, and technopolises - places that embrace new technologies.

It even influenced the naming of US cities - take Minnesota's Minneapolis, for one.

In Ancient Greek philosophy, city-states were created as self-governing places with currencies, places of worship, theatres, and social hubs. That philosophy still applies to modern Greece, albeit more homogenised because two-thirds of the population live in urban areas. Virtually everything is a town or city.

The French authority on statistics (INSEE) has guidelines for what constitutes a city that boil down to population measurements.

Simply put: there must be at least 2,000 people living in habitations 200 square metres from each other. For this reason, city status doesn’t tend to be regarded with the same plaudits as other countries.

But that’s not all. It is accepted in France that cities should have a number of features that appeal to its people: a number of cultural sites, a strong public transport system, and historic value all contribute to this.

Formal city status in the UK is granted by the Queen, though this means considerably less than it used to, and is more of a formality.

Historically, cities in the UK were places with cathedrals, and all areas that have remained so, regardless of population size. However, it’s not a requirement.

Now it’s more to do with a rigorous bidding process, where towns make a case to the government as to why they are eligible.

Few applicants are successful - just three of 25 applications made during the Queen’s Diamond Jubilee were accepted: Perth in Scotland, Chelmsford in England and St. Asaph in Wales

The discussion reappeared in the UK recently following the passing of David Amess, a 69-year-old parliamentarian - one of the longest-serving in modern British politics - who was murdered this month while holding constituency meetings.

He had long campaigned for the area he represented, the coastal town of Southend, to receive city status, arguing it by far had the cultural capital to do so. To honour his passing, Prime Minister Boris Johnson has confirmed that Southend will become a city, making it the UK’s 52nd.

The German government’s Institute for Research on Building, Urban Affairs & Spatial Development says that a Großstadt, or large city, contains more than 100,000 people living there. By this definition, Germany has 80 cities.

Kaiserslautern, situated at the edge of the Palatinate Forest, is referred to as such despite being 2,000 shy of the required number.

In 2014, the Italian Parliament approved a law that defined the country as having 10 metropolitan cities, though this is more for legislative than cultural purposes.

Each metro city has a mayor, a central body that decides on laws pertaining to travel, policing, and local planning, and the number of councillors operate on a sliding scale depending on population size.

Generally speaking, any place in Italy with a population of over 50,000 is a city, or municipality. By this logic, Italy has many cities, 145 in fact. Confusingly, there can be multiple cities in a ‘region’ based on this premise.

Tuscany, for example, is home to 15, ranging from Florence to Scandicci, a small, ancient commune on its outskirts.