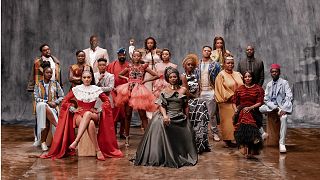 A new series of African folktales is coming to Netflix next year, but the world’s biggest streaming service is still looking for the right creators.

The company is searching for the brightest filmmaking talent across Sub-Saharan Africa, with the six winners receiving over €60,000 to make their short movies.

The competition launched last week in partnership with UNESCO - which, in a recent report, found that Africa’s creative industries are grossly underserved but could create an extra 20 million jobs.

“Africa has a rich storytelling heritage and a wealth of folktales that have been passed down for generations,” says Ben Amadasun, Netflix’s director of content in Africa.

“When you marry these very local stories with Africa’s emerging talent, there’s no limit to fresh new stories to connect people with African cultures and bring the world that much closer to each other.”

Amadasun, who is Nigerian, told the New African magazine in May that he believed “a golden age for African films” is just beginning - and Netflix has an important role to play.

What are Netflix looking for?

Netflix are after the “bravest, wittiest and most surprising retellings” of Africa’s best-loved folktales.

The competition, which closes on 14th November, is open to 18-35 year olds from the 46 countries south of the Sahara Desert. 20 shortlisted candidates will be announced in January and invited to pitch to the streaming giant, before an independent judging panel selects the finalists in February 2022.

Six budding filmmakers will receive $75,000 US dollars (€64,600) through a local production company to develop, shoot and post-produce their films under the guidance of industry mentors over the spring and summer next year. Each winner will also receive $25,000 - around €21,550.

By the time it hits our small screens next autumn, the new short films - each around 20 minutes long - will premiere as ‘An Anthology of African Folktales.’

How will the competition help boost Africa’s creative industries?

UNESCO approached Netflix while it worked on the first complete mapping of Africa’s film and audiovisual industries.

A lack of funding, poor internet and piracy are among the factors curbing the growth of African cinema, the report found. But with proper investment, the sector could quadruple both its revenue and jobs, to $20 billion in GDP and 20 million jobs.

Africa is by far the most underserved continent for cinema distribution, with only one cinema screen per 787,402 people.

Across the continent, there is only one cinema screen per 787,402 people.

The folktale theme is inspired by the African Union’s 2063 Agenda’s fifth aspiration, which is to promote an Africa ‘with a strong cultural identity, common heritage, shared values and ethics.’

If you’re an African filmmaker who thinks they’ve got what it takes, you can find out how to apply here. This life-changing opportunity starts with just 500 words.