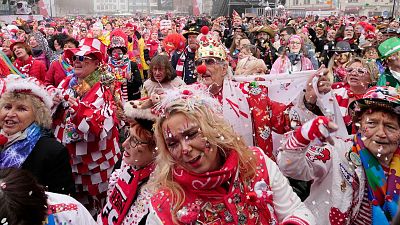 Thousands of eager partygoers returned in force as celebrations went underway at Cologne Carnival this week.

Eager revellers took to Cologne's Heumarkt Square dressed up as clowns, bees, pirates or tigers and seemed unfazed by the country's spiking virus numbers as they danced vibrantly to brass band live music.

Carnival season was officially declared open in the old city, kicking off month-long-series of events that take place next Spring from February-March.

'We waited so long to celebrate together again'

Cologne's carnival was cancelled last year due to COVID-19, but returns after the hiatus despite the country being faced with a record surge in infections.

“We waited so long to celebrate together again,” Cologne Mayor Henriette Reker said on public broadcaster WDR. “Carnival is simply part of our culture.”

The only thing interrupting the celebrations from now until then is a festivity of a different kind - Christmas.

On Wednesday, Germany recorded 50,196 new cases, according to the Robert Koch Institute. However, the carnival only permitted people recovered from or vaccinated against COVID-19.

"I don’t feel guilty that we’re celebrating now, because if the politicians think it should be restricted then we’ll stick with it. But until that happens, we will continue to celebrate accordingly," said the Treasurer of the Carnival Association in Cologne, Uwe Schörnig.

Check out the video above to see the start of the carnival.

How this Italian city defied China in spotlighting dissident artist