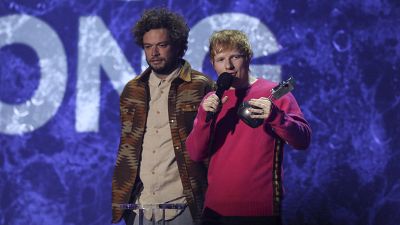 The MTV EMA’s have shown solidarity with the LGBTQ community whilst holding their award show in Budapest.

Statements of support and performances by queer artists made the night in Hungary, whose right-wing government has attracted criticism for its anti-LGBT policies, a defiant celebration.

The show was opened by Ed Sheeran who won best artist. American rapper Saweetie handed him the award and expressed the need to show “respect for the LGBTQ community”.

Big wins came for queer artists Lil Nas X who won best video for “MONTERO (Call Me By Your Name), as well as Eurovision winners Maneskin who took home the prize for best rock act.

Speaking ahead of the award show, the president and CEO of MTV Entertainment Group Worldwide, Chris McCarthy, talked about the opportunity of holding the EMAs in Hungary.

McCarthy said he wanted to make a stand for gay and transgender civil rights worldwide in the Central European nation that has moved to curtail them.

"We're looking forward to using the event to amplify our voices and stand in solidarity with our LGBTQ siblings," McCarthy said in an interview with The Associated Press, adding that no censorship of the telecast would be tolerated,” the CEO said.

History in the making at the EMAs

German artist Kim Petras, who made history last night by being the first transgender musician to perform at the EMAs, said she hoped would inspire the local LGBTQ community to "not give up on themselves."

Over the summer Hungary's government, led by Viktor Orbán came under heavy backlash when it passed a law forbidding the promotion or depiction of homosexuality to minors.

Changes to the Hungarian constitution in 2020 altered the definition of families to exclude transgender and homosexual people. Although civil partnerships are recognised, gay marriage is banned in hungary which makes adoption for gay couples all but impossible as adoptive parents must be married.

The EU watchdog had warned Orbán’s government about his law changes in 2021 but to no avail.

A high spot of the evening was the “Generation Change Award”, a new category honouring five activists fighting against anti-LGBTQ policies worldwide.

Actress and talk show host Drew Barrymore honoured the winners through a video message, saying they are doing "incredible things for the LGBTQ+ community."

Radvanyi dedicated the award to Hungary's LGBTQ community and urged them to "get out and vote together" in Hungarian elections scheduled for April, where Hungary's right-wing governing party faces its most serious challenge since it took power in 2010.

"Never accept the notion that you should tolerate violence and discrimination," Radvanyi said. "Every single human being is born equal, period ... Let's not let them force us back to the closet."

From the old to the new: remembering jazz giant Pharoah Sanders

Rihanna heading to the Super Bowl - why the fuss?