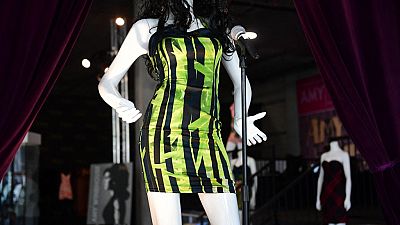 The dress worn by Amy Winehouse for a concert performance in Belgrade is displayed at Julien's Auctions in Beverly Hills, California on November 1, 2021.   -   Copyright  FREDERIC J. BROWN / AFP   -
By Josephine Joly  with AFP  •  Updated: 08/11/2021

A green and black bamboo print dress worn by British singer Amy Winehouse was sold for $243,200 (€210,395), 16 times its estimated value, as part of a trove of memorabilia from the late diva's life auctioned in California.

Winehouse wore the figure-hugging halter minidress, designed by stylist Naomi Parry, during her final stage performance at a concert in Belgrade in June 2011 where she was booed off stage after appearing to forget her lyrics.

A month later, on July 23, the 'Back to Black' star died at her home in Camden, north London, from alcohol poisoning. She was 27 years old.

Her death was the culmination of a lengthy – and often very public – struggle with alcohol and drugs.

The dress was the most valuable piece within a collection of 800 items – ranging from bras, books, bags, make-up, and DVDs – that belonged to the artist and that were offered for auction by her parents, Mitch and Janis.

Sales from the event organised by the elite auction house 'Julien's Auctions', which ran from Saturday to Sunday, amounted to a cool $4 million (€3.5 million).

The proceeds will go to the Amy Winehouse Foundation, which supports vulnerable young adults struggling with addiction.

Many of the items presented at the sale in Los Angeles shattered their pre-auction estimates.

Winehouse, one of the defining stars of her generation

"The prices we are getting for Amy Winehouse are prices that we've got with previous auctions for people like Marilyn Monroe, so she's just a global icon as Marilyn Monroe was," revealed Martin Nolan, director of Julien's Auctions.

"We lost Marilyn very young, we lost Amy obviously at 27. So I think that's what people are clinging onto. They're trying to keep that memory alive and want to own something to preserve her legacy," Nolan went on.

The 400-plus-page catalogue put together by Julien's was a walk-through of the singer's influences and career, but also her distinctive retro style that made her a fashion icon.

A metal street sign reading "Camden Square" inscribed with handwritten notes from fans paying tribute to Winehouse after her death sold for $19,200 (€16,600).

Multi-Grammy-winning Winehouse was one of the defining stars of her generation, known for her soulful voice on songs she wrote such as 'Rehab', 'Back To Black' and 'Love Is A Losing Game'.