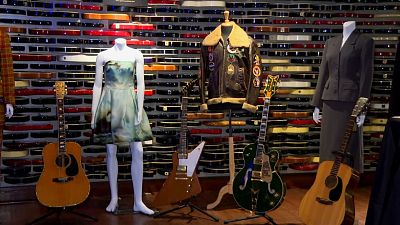 The annual 'Icons & Idols: ROCK 'N' ROLL' auction by Julien's is back with memorabilia from some of the music industry's most legendary artists of the 20th and 21st century.

Items up for grabs include:

Clapton's 1968 Martin D-45 acoustic instrument is the toast of this year's auction, which anticipates the guitar could fetch €264,000-€440,000 during bidding this weekend.

"And I think that's a conservative estimate," said Martin Nolan, executive director of the house.

Over 900 items expected to sell for millions

Bidding will take place in New York City all week as a collection of over 900 items sell for eye-watering sums of money.

One of the auctions biggest draws – a setlist written by Kurt Cobain – features scrawled scrawled songs including 'Come As You Are' and 'About A Girl' on a tablecloth he signed along with bandmates Dave Grohl and Krist Novoselic.

Last year at Julien's Auctions annual event a retro acoustic-electric guitar the late star played during the legendary 1993 MTV Unplugged performance snagged a record €5.4 million, the most expensive guitar ever sold at auction.

Nirvana are always a big draw for collectors at Julien's. In 2019, the cigarette-singed cardigan that grunge's reluctant poster boy wore during that same performance went for €300,000.

"COVID has impacted people. People want to spend money. People are spending money on themselves. They're going after the toys that they want," explains Nolan.

"Before that, they might have considered investing in the stock market or something else. Now they want something collectible, a tangible piece, great conversation piece, a fun place to own, and very likely in years to come will appreciate in value."

'There will always be something controversial'

Asked if Julien's considered the controversy surrounding Clapton in choosing to highlight items connected to the rock star, Nolan said "there will always be something controversial."

"I could go down the list with every star that's represented here," he said. "We don't focus on that; we focus on what's good, the amazing music that they've given us for many, many decades."

The 76-year-old Englishman Clapton – who in recent years has made a very public turn to far-right conservatism – played the guitar during the 1970 debut live concert performance of Derek and The Dominos, the group he founded that was behind the classic 'Layla'.

Daniel Humm: Man vs Tradition as chef walks out on Claridge's