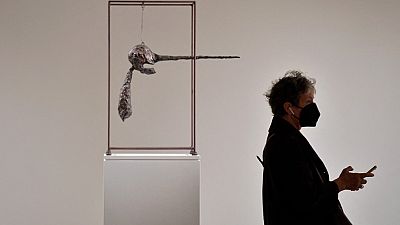 After more than a year, in-person auctions return to New York this week with, among others, the sale of the Macklowe collection.

In September, Sotheby's won the rights to sell the Macklowe collection, the subject of a legal dispute following the high-profile divorce of New York real estate developer Harry Macklowe and his ex-wife Linda in 2018.

The auction house is billing the pieces, worth $600 million (over €520m), as the largest collection of modern and contemporary art ever put on the market.

From Alberto Giacometti to Frida Kahlo through to impressionist and minimalist artists, the choice for buyers is large and diverse.

At auction houses Christie's and Sotheby's, the message is the same: the art market is thriving.

With sales starting on November 15, estimates are to bring in more than $1 billion (over €868m) in a week.

"I believe there will be artists' records achieved. This is the largest sale season that we've presented since 2015. This will be the first really big sale season since the beginning of the pandemic. And we expect this return to pre-pandemic levels of supply to be met with an eager market audience," said Brooke Lampley at Sotheby's.

Experts say the pandemic has not negatively impacted the funds nor appetite of potential buyers, who are increasingly in Asia and younger than their predecessors.

"A lot of people are looking at their walls, thinking about the art they want to add to their collection because they're spending so much more time in their homes," noted Emily Kaplan at Christie's.

The NFT revolution sends shockwaves in the art market

Christie's auction season begins Tuesday with a 21st-century sale, focusing on solid bets such as Banksy's works, but also a monumental painting by Jean-Michel Basquiat, 'The Guilt of Gold Teeth', expected to reach new highs.

However, the new trend is for NFT (Non-fungible Token), a new form of digital artwork sending shockwaves in the art market.

Digital artist Beeple's sculpture, 'Human One', which depicts a helmet-wearing astronaut walking through a changing environment, can be modified remotely by the artist at any time, even once installed in the buyer's house.

The dematerialised artwork will go under the hammer at Christie's.

"I fully think that we're in 'Go West' mode right now. It feels a lot like prospecting almost, or a gold rush is happening. And I think it makes perfect sense," expressed specialist in digital art and Christie's associate vice-president, Noah Davis.

"I'm not wringing my hands over the whole NFT revolution. In fact, I'm obviously doing everything that I can to accelerate it. But I don't think that there's actually, you know, hot take, very much difference in the artistic merit of 'Human One' and Caillebotte across the way," Davis went on.

Artists' records to be achieved at the sales

A sales record for Frida Kahlo could be broken at Sotheby's, which will auction off her self-portrait 'Diego y yo' valued at $30 million (€26m).

On Thursday, Christie's will auction a collection of Impressionist pieces assembled by Texas businessman Ed Cox, a wealthy Republican Party donor who died in 2020.

The collection includes one piece each from masters such as Edgar Degas, Pierre-Auguste Renoir, Claude Monet, Camille Pissarro, Paul Cezanne, and Gustave Caillebotte, as well as three paintings from Vincent Van Gogh.