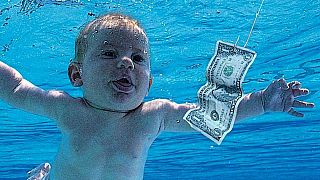 Spencer Elden, who appeared on the iconic cover of Nirvana’s album ‘Nevermind’ as a baby, has lost his lawsuit claiming that the image constitutes child sexual abuse.

It’s one of the most famous album covers out there. Nirvana’s second album, ‘Nevermind’ - featuring songs like 'Smells Like Teen Spirit', 'Come As You Are' and 'Something In The Way' - has sold more than 30 million copies worldwide.

The baby on the cover, a four-month-old tot who swims to reach a dollar on a fishhook, has turned out to be quite prescient… Spencer Elden, now 31-years-old, has sought damages from the surviving members of the band (Dave Grohl and Krist Novoselic), as well as the estate of the late Kurt Cobain and photographer Kirk Weddle.

His third lawsuit has now been dismissed by US District Judge Fernando Olguin in Los Angeles, on the grounds that Elden waited too long to file the lawsuit. Elden previously amended the reasons for his original claim after it was thrown out by a judge earlier this year, and this new ruling will prevent Elden from filing further lawsuits regarding the artwork.

Why was Nirvana being sued?

The lawsuit alleges that appearing naked on the cover caused Elden emotional distress and further claims the musicians "commercially marketed Spencer's child pornography and leveraged the shocking nature of his image to promote themselves and their music at his expense.” He asked for $150,000 (approx. €150,400) in damages, along with attorney fees.

Elden's lawyer, Margaret Mabie, stated that “the ‘Nevermind’ cover was created at time when Spencer was a baby and it is impossible for him to age out of this victimisation while his image remains in distribution.”

In a previous statement, representatives for Nirvana cited occasions where Elden had embraced being featured on the artwork, claiming that he had “spent three decades profiting from his celebrity as the self-anointed ‘Nirvana Baby'”.

"He has reenacted the photograph in exchange for a fee, many times; he has had the album title 'Nevermind' tattooed across his chest; he has appeared on a talk show wearing a self parodying, nude-colored onesie; he has autographed copies of the album cover for sale on eBay; and he has used the connection to try to pick up women," they said.

Elden has said he will appeal this new ruling.

Over 900 collectibles on sale now at music's biggest auction