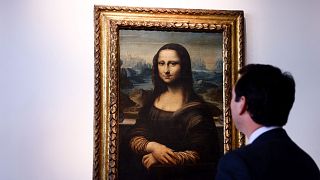 A faithful copy of Leonardo da Vinci's Mona Lisa dating from more than 400 years ago has sold for €210,000.

The painting spent some time in Artcurial auction house, Brussels, before being transported to Christie's in Paris for an auction that took place yesterday.

Leonardo's original, which French King Francois I bought from the painter in 1518, can be found in Paris' Louvre museum and is not for sale.

But this version, dating from around 1600, is so similar to the original that experts say it is likely that the artist had close access to Leonardo's version.

'Everyone wants to own a high-quality version of Mona Lisa'

This copy is widely known as Hekking's Mona Lisa, after ex-owner Raymond Hekking, an antique dealer who died in 1977. He procured the work from an art dealer in nice during the 1950s.

Hekking purchased the painting for just €2.57 and spent a great deal of his life convinced it was the true Mona Lisa and produced a publicity campaign claiming so.

"She is the perfect illustration of the fascination the Mona Lisa has always inspired and which she exerts more and more," muses Pierre Etienne, International Director of Old Master Paintings at Christie's.

"She is the dream of a man with a passion for art. She is his Ideal. Raymond Hekking was her staunch defender among art historians and the world’s media in the 1960s. She will be his Muse, he will be her Poet.”

One in a sea of copies

This is not the first time a Mona Lisa replica has been front and centre of the art auction world.

There are at least a dozen copies out in the world - many of which were painted by students of Da Vinci.

"Mona Lisa is the most beautiful woman in painting," Matthieu Fournier, Artcurial's expert and auctioneer, said as the painting went on public display ahead of the sale in Belgium.

"Everyone wants to own a high-quality version of Mona Lisa."

Leonardo, he stressed "had fans, because he invented a style. He had followers, imitators".

In June, a European collector bought another 17th century copy of Mona Lisa for €2.9 million, a record for a reproduction of the work, at an auction at Christie's in Paris.