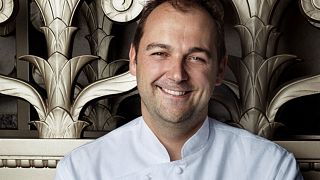 "It has never been more clear that the world is changing, and we have to change with it."

This sentiment was expressed this weekend (Sat Nov 13) by Michelin-Starred chef Daniel Humm upon the occasion of his resignation from English culinary institution, Claridge's.

"My career started at Claridge’s and to go back was an incredible gift," Humm said in a statement released on Instagram. "It is a beautiful restaurant, with a dedicated and passionate team."

Why did Daniel Humm resign?

A clash of culinary ideologies, essentially. Claridge's, in many ways, is famous for not changing.

Davies and Brook have a classic though not remotely unimaginative menu, where one may find hearty traditional dishes such as roasted venison with yellow beetroot, juniper and onion relish, or honey and lavender glazed duck with confit pear and pickled daikon, not forgetting the roasted poussin stuffed with black truffle, foie gras and brioche.

"The future for me is plant-based. This is our mission and what we stand by as a company."

Claridge's released a statement thanking Humm for his work.

"We completely respect and understand the culinary direction of a fully plant-based menu that Daniel has decided to embrace...however this is not the path we wish to follow here at Claridge's," it stated.

Trailblazers like Humm are few and far between but this furore reminds one of Alain Passard, a 3-star chef who, twenty years ago, grew weary of meat and focussed his Parisian flagship restaurant, L'Arpege, on vegetables in a turnaround that stunned the cooking world.

Passard, to the amazement of some, kept his stars and still has them.

A missed opportunity for Claridge's in 2021, or a sound judgement based on branding and solid knowledge of the target audience? Passard made the change, though not quite as wholesale, and survived, and perhaps we should credit Claridge's demographic with the ability to reappraise what might be termed a 'slap-up meal'.

Over 900 collectibles on sale now at music's biggest auction