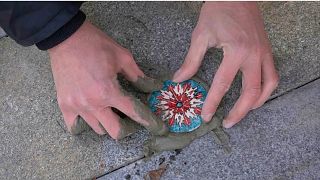 Pavement potholes are the bane of any large city, but in Moscow a ceramic artist is drawing attention to these imperfections by turning them into little works of art.

"These circles are very standard shape, there's just a lot of places where (road) signs have been removed (leaving such holes), or there are another bigger diameter holes, it's where the poles used to be on the sidewalks, and they're never covered by anything either," says Kravchenko.

The artist started the project in 2018 in Irkutsk, Russia, where he is from.

"Like any normal person I had an idea in my head about what I can do. I mean, it's clear that I'm not going to be able to patch all the holes, but since I'm a ceramic artist, I thought why not draw attention to this issue by making such funny insertions," says Kravchenko.

The holes are all around the city and he stumbles upon them accidentally. Before the production the hole is measured with a piece of paper to ensure the patch fits. Kravchenko believes drawing is not his greatest strength, so he often creates patterns, or abstract designs.

Kravchenko claims he would feel no regret if the patches were to disappear under a new layer of asphalt, because the ultimate goal of his project was to make the roads tidier.

According to Kravchenko it is the reaction of people that motivates him. He photographs all the patches and posts them on his Instagram page. Sometimes people comment expressing their joy that they have found a patch.

"When I put up a new patch, it's really nice to read what people write: "I found it, here is a photo of it." It cheers up some people, and inspires others, and these positive emotions make me, no, they don't even make me, but they help me continue this project," says Kravchenko.

So far, all the Moscow patches are in good shape, unlike Irkutsk ones, where the climate is harsher, and ice is broken with iron bars which often destroys the patches too.

In the future Kravchenko plans to continue co-operating with other artists and hopes to produce patches featuring historic tiles.

Watch the video above to find out more about Ivan's ceramic pothole patches.

The UK is losing Christians and gaining far-right conspiracy theories