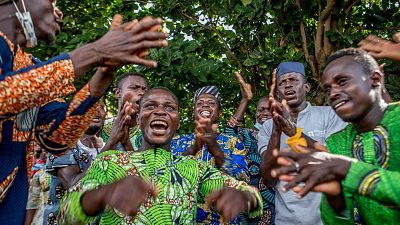 Palpable elation in the air as the residents of Benin celebrate the return of their Bronzes   -   Copyright  AFP
By Shannon McDonagh  & Theo Farrant  with AP  •  Updated: 11/11/2021

Benin on Wednesday celebrated the return of 26 colonial-era artefacts which were looted by the French army 129 years ago.

The ancient statues, royal thrones and sacred altars were welcomed with an official homecoming ceremony at the presidential palace in Cotonou.

Benin President Patrice Talon and French President Emmanuel Macron had sealed the agreement to return the treasures to Benin on Tuesday.

The collection - known as the Abomey Treasures - will remain in a room at the presidency.

"Today's gesture is the possibility for the youth of Benin, of Africa to see again the works of its history and heritage, to be able to admire them at home," said Macron.

'The stars have been aligning for Benin for some time now'

The 19th century statues represent just a fraction of the 90,000 artefacts from sub-Saharan Africa alone held in French museums.

The return of the artefacts comes as calls mount in Africa for Western countries to hand back colonial spoils from their museums.

"The stars have been aligning for Benin for some time now. The symbolism of the return to Benin is about our soul, our identity - to use a word that is easier to put on it to understand. This return is testimony of what we've been. The testimony of how we existed before." - Patrice Talon, Benin President.

When were the Bronzes stolen and who decided to return them?

In November 1892, Colonel Alfred Dodds led a pilfering French force into the Kingdom of Danhomè on an expedition of the south of present-day Benin.

The colonising troops broke into the Abomey Palace, home of King Behanzin, and stole a number of royal objects, including the 26 artefacts we now see returned.

Upon their return, Colonel Dodds donated them to the Musée d’Ethnographie du Trocadéro in Paris.

Since the 2000s, the objects have been housed at the Musée du quai Branly–Jacques Chirac.

President Macron was the first major world leader to acknowledge Europe's colonial history had lead to the looting of these artworks.

He made a landmark speech in 2017 - six months into his first term - arguing that France needed to right the wrongs of the past.

Macron argued he could not accept "that a large part of many African countries’ cultural heritage lies in France.”

It laid down a roadmap for the return of the royal treasures taken during the era of empire and colony.

Other countries have since followed suit, with major returns in Scotland, Germany, and the UK.

Watch the video above to find out more about Benin's historic celebration.