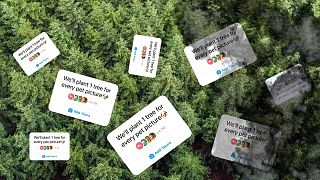 If you’ve opened Instagram this week, you’ve likely been flooded with photos of people’s pets. More so than usual, to be clear.

A strange sticker on Instagram stories has appeared, promising that for every photo of a pet shared a tree will be planted. The social media platform confirmed it was nothing to do with them, as literally millions of people joined in the game.

Though this looks like an ill-conceived viral trend, the truth is actually a lot more suspect than that. From the Florida-based organisation at the heart of this bizarre situation, to the reason we should always be suspicious of tree-planting promises - we’ve unpacked the full story for you here.

Who has claimed to be behind the tree-planting-pet-photo trend?

A little earlier today, a page called Plant A Tree Co. shared a carousel claiming to be behind the viral sensation.

Although more than four million people at the time had shared photos, the creators of Plant A Tree Co. said they lack “the resources to plant that many trees,” and despite their best efforts to delete the campaign - it “continued to spread out of [their] control.”

The organisation has subsequently set up a fundraiser to try to harness the attention they’ve garnered over the last 48 hours.

But is this really just a simple mistake that’s grown out of control? It doesn’t seem so.

The fundraiser on Instagram says it’s for Trees For The Future, a regenerative farming and agroforestry charity.

There are some major problems with tree-planting schemes (we’ll dive into that shortly), but Trees For The Future runs a far more ethical and responsible system - planting tree forests, rather than dangerous monocrops.

So that sounds good, right? A fundraiser for a good organisation is surely a win win.

Well, except for the fact that Trees For The Future has publicly taken to Instagram to disavow any notion that they are connected with Plant A Tree Co. In fact, a recent Instagram story urges interested parties to donate directly to them through their website - and not to use the Plant A Tree Co. fundraiser.

That’s not a great sign - but it actually gets a lot weirder.

On Plant A Tree Co.’s website, it claims the organisation wants to plant a million trees by the end of the year and that it’s already planted 6,500 to date.

There’s no more details on where these trees have been planted, when, by whom, or how. There is, however, plenty of information about the ten types of necklaces they sell.

This is part of a really common drop-shipping scam where consumers are effectively duped into thinking they are getting a product for ‘free’ while paying extortionate shipping fees that are worth substantially more than the item. The products then often never arrive.

Now Plant A Tree Co. claims that for every necklace sold, a tree will be planted. But there’s no real accountability for this, and no way of guaranteeing any trees have or will be planted by the company.

What has Plant A Tree Co. done before?

It turns out that Plant A Tree Co. has actually been the centre of a previous Instagram-based whirlwind. More than once, in fact.

In May 2019, Plant A Tree Co. claimed they would plant 100 trees every time a post was shared to a story. After garnering more than a million likes, the post was deleted - and, perhaps unsurprisingly, no trees were ever shown to be planted.

They ran similar sharing schemes during both the Amazon and Australia wildfires, again using these environmental tragedies to gain Instagram traffic, claiming to donate money to firefighters and plant more trees. Of course, these posts were also deleted with no evidence of any charitable acts either.

From the pain caused by racial injustice to the eco-anxiety felt keenly by so many now, Plant A Tree Co. appear to be willing to use anything for self-promotion.

Stepping away from the eco space briefly, in June 2020 - shortly after the murder of George Floyd, during the wave of support for Black Lives Matter - Plant A Tree Co. claimed that for every share of one of their posts, they would donate 10¢ (€0.09) directly to #BLACKLIVESMATTER.

This post was also deleted, with no evidence ever given of any donation towards any racial justice organisation.

These various outlandish claims of philanthropy have been documented across Instagram, as users began to keep track of their questionable activity.

It seems as though the people behind Plant A Tree Co. like to harness public emotion to grow their following - and presumably earn some money through their necklace sales.

From the pain caused by racial injustice to the eco-anxiety felt keenly by so many, Plant A Tree Co. appear to be willing to use anything for self-promotion.

Who is actually behind Plant A Tree Co.?

This is where the detective work has really been done for us. Australia-based freelance writer Patrick Malborough wrote an excellent thread on Twitter earlier today unpacking exactly who is behind Plant A Tree Co.

Marlborough found that Zack Saadioui, a recent computer science graduate from Florida is reportedly the founder of Plant A Tree Co. - as well as a parking app called Prked.

In fact, Malborough found that Saadioui has a YouTube channel dedicated to growing passive income. Partway through the video, he explains how he uses drop-shipping to earn significant sums - relying on social media marketing.

We have reached out to Zack Saadioui for comment.

It’s pretty clear that four million trees are not going to be planted because of people’s pets. But honestly, that’s a good thing.

Though there are some (a select few) organisations that do tree planting responsibly, like search engine Ecosia, the vast majority are questionable.

That’s because tree planting simply isn’t an effective way to combat the climate crisis. Many are irresponsibly managed, meaning we end up with monocrop plantations that end up dying and causing far more problems.

For example in Turkey, a record-breaking mass-planting project saw 11 million saplings planted. However, a few months later an estimated 90 per cent of the trees had died according to the country's agriculture and forestry trade union.

In some places, like the Scottish peatlands, trees are being planted where there never were any to begin with. This in turn destroys the peat bogs - natural carbon sinks - damaging the biodiversity of the area and the entire local ecosystem.

Many tree-planting schemes are simply being used to help greenwash and boost customer sales, without offering any actual transparency over who is doing the planting and how.

For example, ecommerce giant The Hut Group (THG) offers a service to its clients, helping them offer built-in tree-planting to their customers on their websites through a scheme called (more:trees).

There’s no information on where these trees are planted, by whom, how, or any information on sustainable forest practices. In effect, it’s a way for companies to greenwash cheaply and effectively - because (as this pet photo trend has shown) everyone loves trees.

Trees are fantastic in lots of ways, but we’re far better off preserving our existing forests and preventing deforestation than mindlessly planting rows and rows of saplings because someone shared a photo of their dog.

So no, it doesn’t look like any trees are going to be planted from this scheme. But that’s not such a bad thing anyway.