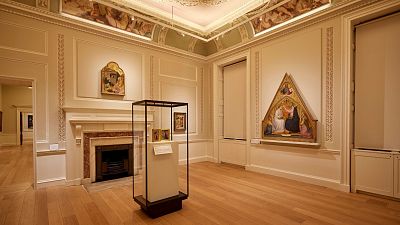 The Courtauld Gallery in London, closed since 2018 for renovation, will reopen its doors this month to showcase its world famous assortment of paintings.

It follows a major €58 million regeneration of its home site, Somerset House, which has been completely transformed to better showcase its sweeping, intricate collections.

Most notably, its French impressionist paintings and dedication to the study of the renaissance period.

Renovation of moldings, restructuring of rooms, creation of disabled access are just some of the changes visitors can expect from the historic listed building on the banks of the Thames.

Three years of reimagining the space will finally come to light when the Courtauld reopens its doors on November 19.

Visitors can expect spacious, brighter rooms that are a world away from the Courtauld first founded 89 years ago.

"What we wanted to do was harmoniously blend one of the UK's largest collections with this important historic building," Ernst Vegelin van Claerbergen, in charge of the gallery, told AFP.

"The two things meet and work beautifully together."

Designed by Stirling Prize-winning architects Witherford Watson Mann with gallery design by Nissen Richards Studio, the redevelopment revitalises and opens up the building conceived by Sir William Chambers in the 1770s to create an inspiring setting for the 21st Century.

The Blavatnik Fine Rooms, spanning the second floor, will provide the stunning setting for a series of new displays of works from the Renaissance to the 18th century.

Highlights will include Botticelli’s large-scale The Trinity with Saints, unveiled after a three-year conservation project, and The Courtauld’s celebrated collection of works by Peter Paul Rubens.

Among the major works carried out, the complete overhaul of the 'Great Room', the oldest exhibition space in the British capital, the Royal Academy having held its famous summer exhibitions there between 1780 and 1836.

'Self-portrait with a bandaged ear' by Vincent Van Gogh or 'Un bar aux Folies Bergère' by Édouard Manet are two of its crown jewels. In fact, the Courtauld is one of the few galleries in the UK you can access original work from Van Gogh.

In a completely redesigned and open space, visitors will be also able to enjoy famous paintings by Cézanne, Modigliani, Seurat, Degas, Gauguin, Renoir, even Monet.

The significance of the Courtauld

The Courtauld Gallery houses the collection of the Courtauld Institute of Art – one of the most prestigious academic hubs for art history in the world.

With a yearly intake rarely exceeding 500 pupils and the Princess Royal as its Chancellor, its embrace of European creativity is like no other.

COVID-19 hit the art world hard, and the ripple effects are still being felt today. Though renovations at the Courtauld were already underway when the pandemic arrived in the UK, its absence has been just as sharp as its contemporaries - The Tate Modern and The National Portrait Gallery, for example - reopened last year.

"We feel that it is the right time to reopen," says Vegelin van Claerbergen. "The mood is changing and we hope this will bring joy, fun and inspiration to people who want to get out and explore the city and reconnect with the arts," he added.

Tickets to the Courtauld Gallery can be found here. Watch the video above to find out more.

Madrid monk's unfinished 'scrap cathedral' lives on after his death