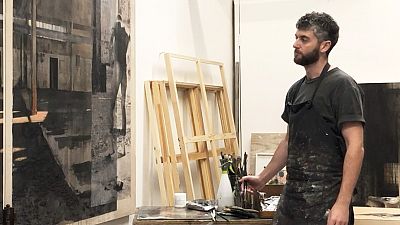 Threatening creativity and stifling social interaction, pandemic lockdowns have disrupted the studies of London’s art students like they could never have imagined.

With studios closed, and tutorials and classes going online, many found themselves under pressure to perform in alien environments.

But it’s not all bad. In fact, in many ways, the pandemic fueled a new sense of determination and perspective. It provided fresh inspiration. Art students, like many of us, have increasingly been trying to make sense of our volatile world.

A new exhibition, at London’s Saatchi Gallery, showcases some of the artwork coming out of the days of England’s pandemic lockdowns.

London Grads Now. 21 features the work of MA students, who’ve graduated this year from the capital’s art schools. Among them is Graham Martin, 38, originally from Ayr in Scotland, who studied painting at the Royal College of Art.

“It’s been a bit of a rollercoaster,” he said. “At first, you’re kind of really thrown into at the deep end, particularly within a programme like painting, which is a studio-based practice. That energy of the studio is really important.

“When that was shutdown in the first lockdown, everyone really felt it. Not only in terms of the lack of community, with everyone being in isolation, but it shut down creativity in a similar way.”

It was particularly hard for a student like Graham who draws inspiration from exploring built environments.

“After that first year, when we came back into the second year, everything was online,” he explained. “We had some limited access to studios. For me, it was an opportunity to kind of explore things in my immediate surroundings.

“Most of my work has in some way responded to the built environment and so I was looking at spaces outside the studio and adopting new methodologies for things that I’ve learned.”

The pandemic lockdowns took their toll on the world’s mental health, with a rise in feelings of isolation and loneliness.

For Graham, his painting studies provided focus in a world engulfed in chaos and confusion.

“It was having the structure of the MA to kind of see you through. Working towards milestones, first of all the academic elements like the dissertation and then an ongoing series of crit. So, individual tutorials with tutors which are always really inspiring. But also group tutorials and the access we had to other students. All of that was online, but it was still really valuable,” he said.

London Grads Now. 21 features the work of more than 200 artists and curators. Back for a second year, it was born out of Covid – with the usual graduate shows cancelled. It provides an alternative, public platform to showcase some of the best emerging talent.

“To have it out and in an institution like Saatchi is kind of invaluable,” Graham beamed. “To have opportunities to show work in real life, and for people to see it in the flesh, is really important.”

Graham has always had a passion for arts, but only got his own studio around eight years ago, after training and working as a lawyer. Now he combines law and art.

“My practice more and more explores the themes of queer time and queer space. And it’s kind of centred on that idea of queer identity,” he explained.

“Typically, it’s always responded in some way to the built environment, so architecture and exploring the kind of ambiguity in liminal spaces. So, I’m interested in the contemporary ruin, abandoned industrial spaces and thinking about historically how they were reclaimed or occupied by marginalised communities, like the queer community.”

At London Grads Now. 21, Graham is showing a piece of work called ‘A Portal,’ which features an image of a naked man.

“The work I have here is a sink fragment from a warehouse where I was kind of enacting performances and I was using this as a kind of research methodology, as a way of accessing some of those histories that I guess were written in the margins,” said Graham.

“Thinking about a time, a real kind of moment of liberation in the gay community, prior to the onslaught of the HIV-Aids crisis,” he continued.

“For me, it’s about placing myself in the culture historically. Men and women of my generation, we were denied an education around what it is to be gay, what it is to be part of a queer community. And it was a way for me to place myself back into those histories, sort of understand my place in that context.”

For Graham, now armed with his MA, he’s focused on putting all his learning into practice. Having his work shown at the Saatchi Gallery, amongst all the other creativity, has been a welcome boost.

“You see the diversity of practices. I am so proud to have my work amongst so many kinds of incredible graduates,” he said. “It feels like, to a certain extent, the pandemic hasn’t dampened that as much as it might of.”