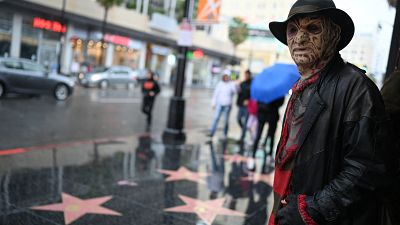 A Freddy Krueger impersonator on the Hollywood Walk Of Fame, situated near the real house   -   Copyright  ROBYN BECK/AFP
By Shannon McDonagh  & Reuters  •  Updated: 22/10/2021

Are you a horror movie lover with €2.8 million in change? Your dream may have just become reality.

The house from 'A Nightmare On Elm Street' is up for sale and it could be yours - if you submit your offer by midnight on Halloween (October 31).

Despite the 80s horror classic being set in Ohio, the property can actually be found at 1428 N Genesee Avenue in Los Angeles, just off Sunset Boulevard.

The exterior of the house is frequented by fans of the Wes Craven film and has changed very little in almost 40 years. It's especially popular with visitors over the Halloween period, making it the perfect time to go on the market.

Who owns it now?

Right now, it's owned by Hustlers writer and director Lorene Scafaria, who lives in it with her partner, musician and comedian Bo Burnham. It was last sold to her for €1.8 million in 2013.

Burnham's widely praised Netflix special, Inside, was shot in the property's guest house during the US COVID-19 lockdown last year.

Wait…is it common knowledge that Bo Burnham filmed Inside at the house from A Nightmare on Elm Street? Because I’m just learning this

The two-storey Dutch colonial home has three bedrooms and four bathrooms - including an en-suite for every bedroom - and walnut floors, plus an "open retro-modern kitchen", a "grand primary suite" and a separate laundry room.

Like many American homes in comparison to Europe, it's incredibly spacious - the whole thing is 2,700 square feet in total.

The property also comes with the newly-famous detached guesthouse and a pool.

Elliman, the agent in charge of the sale, features plenty of pictures here.

A terrifying treat for fans of the film

Fans of A Nightmare On Elm Street will remember the house for a host of reasons. Most notably, it was the place where a 21-year-old Johnny Depp met his fate playing Glen Lantz in his film debut.

The movie starred Robert Englund as Freddy Krueger, and the 74-year-old actor previously admitted playing the iconic horror villain transformed his life and his career.

"I was lucky. I had the whole of the 70s playing best friends and sidekicks and then towards the end I was everybody's favourite redneck... I'd already been established in Holly-weird and knew who I was was.

"When I did Freddy, it just banged me into international actor overnight. I'd never had that kind of success before - it was like grabbing the ring on the merry-go-round, you know. I got it - I just hung on."

Englund admitted that new technologies have since helped to fuel the success of the 'Nightmare on Elm Street' franchise.

And due to the popularity of various spin-offs - including other films and a TV series - he now believes he's on his "third generation of fans". The majority of those visiting the house on social media are too young to have been alive when the film first came out.

"My career came of age during the video revolution," he explained.

"So, I had hit movies in the theatres and then they became hit films again when they came out on video for a whole other audience. But I had that times eight ... and that's not counting the TV series.

"And not only do I have that times eight, but then I have it again with DVD and Blu-ray and cable and marathons on cable. So you get a new generation - I'm on my third generation of fans."

Anyone with a modest income that wants to buy the house will have to hope the price is slashed in the future...