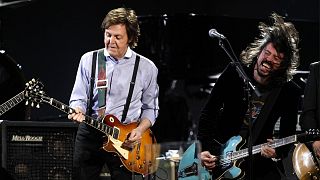 The Rock and Roll Hall of Fame has announced its list of inductees for 2021, brimming as you would expect with some of the world's best musicians.

An in-person ceremony honouring the selections will take place in Cleveland, Ohio, on October 30.

In order to be inducted, an artist must be 25 years into their recording career and selected by a panel of hundreds of rock historians and experts.

The handful of artists that receive over 50 per cent of the panel's approval are inducted each year by another musician who has been influenced by their work.

It is arguably the world's biggest musical honour, and here are this year's esteemed selection.

Who will be inducted into the Rock and Roll Hall of Fame in 2021?

Six artists are being inducted into the Rock and Roll Hall of Fame this year, along with four of the accompanying artists that will be tasked with presenting each award.

Foo Fighters might be one of the only bands in the world that can say their tenth album was good enough to top the charts in 13 countries.

Who will be inducting them?

Paul McCartney will induct the Fighters as a close friend of frontman Dave Grohl. He told the BBC's Graham Norton Show last month that the Beatle was responsible for giving his daughter, Harper, her first piano lesson.

They've both had the pleasure of being inducted twice - McCartney as a soloist and Beatles member, and Grohl having been commended as a member of Nirvana back in 2014 when the band finally became eligible.

Carole King is, officially, the most successful female songwriter of the latter half of the 20th century. Her influence on rock and pop music in this era knows no bounds, and she even has a West End musical to show for it.

King will join Stevie Nicks as the second woman to be inducted twice - she was previously recognised by the Hall of Fame in 1990 as a "non-performer". Confused about what that means? Us too. In essence, it's an award that recognises individuals based on their contributions to the music industry via songwriting, business, and other endeavours.

Who will be inducting her?

Taylor Swift will induct King, and perform some of her music in a role reversal for the pair - King was responsible for awarding Swift the Artist Of The Decade award at the American Music Awards in 2019.

It'll be Swift's debut appearance at the legendary ceremony and her first since live performance since her moderately successful Grammy's stint, to say the least. Oscar-winning actress and singer Jennifer Hudson is also expected to honour King in her performance.

The 'Queen of Rock 'n' Roll' will be taking to the streets of Ohio to receive her award after selling the rights to her music and image for an estimated $50 million earlier this month.

Though she retired from performing live after a bout of serious illness, Turner will forever be famed for her mind-melting vocals and unique stage presence. Her recent step away from the public eye will make this night a real treat for long time fans.

Who will be inducting her?

Angela Bassett - who portrayed Tina Turner in the movie What's Love Got to Do With It? - will induct the singer. Her characterisation of the artist earned her an Oscar nomination for Best Actress in 1993.

Christina Aguilera, Mickey Guyton, H.E.R. and Bryan Adams are scheduled to perform tributes to Turner in what is sure to be a night laden with bombast and glamour.

The Spice Girls are often cited as the instigators of Girl Power being a cultural force in the 90s, but the Go-Go's weren't doing a bad job of it a decade earlier. America in the 1980s was strictly interested in women as singular entities until the Go-Go's came along.

The all-girl group, fronted by Belinda Carlisle, were the first girl group to write all their own songs and play instruments on stage to score a number one album on the US Billboard 100 charts. Their legacy paved the way for the likes of the Riot Grrl movement and poppier female groups to take the stage in the coming decades.

Who will be inducting them?

Charlie's Angel-turned-talkshow-host Drew Barrymore has been enlisted to induct the Go-Go's. It won't be the first time she has crossed paths with the group - Barrymore was once interviewed by Belinda Carlisle as a small child as part of a segment for MTV in 1984.

There's very little Jay-Z hasn't done. After shattering the New York rap scene with a string of critically acclaimed albums across the late 90s/early 00s, the rapper has gone on to produce films, open music schools, and marry the most in-demand pop artist in the world.

The founder of Roc Nation and former Def Jam records chairman was also responsible for harnessing the talents of everyone from Rihanna, to Vic Mensa, to Ne-Yo. He last made an appearance at the Hall of Fame inducting fellow New Yorkers Grandmaster Flash and the Furious Five in 2007.

Who will be inducting him?

Jay-Z's companion for the evening is TBC, but you best believe it'll be one of hip hop's best and brightest.

A 2018 poll cited conducted by the committee cited Todd Rundgren as the third most deserving person to not yet be inducted into the Rock and Roll Hall of Fame. John Mellencamp even raised the issue during an appearance on America's David Letterman show a few years ago.

The virtuoso is widely regarded in the industry as one of the first artists to stretch their ambitions from just performing to producing, and creating the world's first interactive album, No World Order, in 1994.

Who will be inducting him?

Todd Rundgren's inductee is yet to be announced. However, the committee will be stuck for choice - his fingerprints can be found in the music of everybody from Daft Punk to Meat Loaf.

Don't expect Kanye West to do the honours, though - Rundgren dropped out of working on Donda, released earlier this year, because their creative processes didn't mesh.

Are there any other honours being given out?

Yes. Kraftwerk, Gil-Scott Heron, and Charley Patton will also be inducted as part of the 'early influences' category, which is selected by a smaller, specialist panel. This year's non-performer award will go to music's own "Black Godfather", Clarence Avant.

The 90-year-old has served in a number of crucial music industry roles, ranging from branding and promoting Michael Jackson's Bad tour in the 80s to serving as the chair to the board of Motown Records.

However, he didn't fare so well in the Oscar-winning documentary Searching for Sugarman, when the producers implied that Avant had presided over a record label that received payments that were never subsequently passed on to songwriter Sixto Rodriguez.

Nevertheless, the evergreen Lionel Richie, who shot to fame as part of Motown, will deliver a speech about Avant's achievements to celebrate the award.