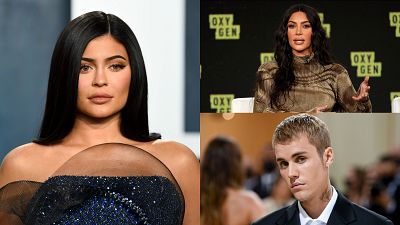 The more you see celebrities like Kim Kardashian, Kylie Jenner, and Justin Bieber in your Instagram feed, the more likely you are to have a worse self-image, a leaked Facebook research document says.

The research, revealed by the Wall Street Journal (WSJ) this week, found that people who followed some of Instagram's biggest social media stars including the Kardashians, Ariana Grande and Katy Perry experienced more negative social comparison, meaning they compared themselves unfavourably to the celebrity images they were seeing.

"[We] may want to offer people the option to hide celebrities temporarily," a member of Facebook staff commented on the document released by the WSJ.

While celebrities' Instagram posts tended to make people feel worse, their Instagram Stories had the opposite effect, leading Facebook's researchers to wonder if the disappearing message format was associated with more positive feelings due to its "unpolished" style.

The research, entitled "Social comparison on Instagram," surveyed 100,000 people in March and April 2020 in nine countries, including the United States, United Kingdom, France and Germany.

Teenagers were more prone to negative social comparison than adults, the research found.

In general, women and teenage girls were more likely to experience negative social comparison, the research said. The only exception to that trend among the nine countries featured in the document were Indian men.

Another strong driver of negative social comparison for Instagram users were posts with more likes than a user's own, as well as heavily edited selfies and beautifying filters.

Instagram introduced the option to hide likes on posts earlier this year. According to the report, opting in to hide likes - described in internal Facebook language as "Pure Daisy" - led to a two per cent reduction in negative social comparison on average.

The research report also gives some insight into how Facebook hoped to solve the issue of negative social comparison on Instagram.

A series of suggestions includes the option to hide likes - which the company implemented earlier this year.

Other suggestions included encouraging "top accounts" to "share more vulnerable content" and finding ways to reduce users' exposure to the kinds of posts that were most associated with negative comparisons.

The researchers also suggested that the company works with celebrities whose followers experienced the highest levels of negative comparison to produce "realness campaigns" to address the issue.

A Facebook spokesperson told the Reuters news agency that while survey respondents were not asked to name specific accounts, researchers found the celebrity accounts were "some of the most frequently seen accounts for people who told us they experienced either higher or lower levels of negative social comparison on Instagram," based on the company's internal data.

The spokesperson noted the findings made sense because the celebrities listed have more than 30 million followers each.

Turning on crypto means turning our backs on vulnerable millions