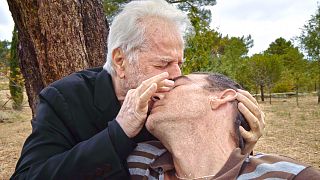 Psychomagic – A Healing Art’ is the latest documentary from avant-garde film maker Alejandro Jodorowsky. The multifaceted artist has developed an alternative method of healing and freeing the sub-conscious through art which bears no relation to mainstream psychoanalysis.

Jodorowsky believes just as genetic information is passed down from generation to generation through DNA, each person also has a 'psychological' DNA that acts in a similar fashion, He feels drama and poetry are linked directly to the subconscious and by using psychomagic therapy, a person can be liberated from any psychological block

“Psychomagic works by using poetry and individual experiences,” he explains. “You have to pay for psycholanalysis and it can last for years while psychomagic is free.”

Together with his partner and director of photography, Pascale Montandon, this visionary artist has now decided to reflect on the notion of time. He believes the past, present and future act as one whole entity.

Psychomagic – A Healing Art was previewed at Lyon‘s Cinema Comoedia in front of a large audience who were keen to observe how Jodorowsky’s creative and therapeutic ideas have evolved.

In reponse to the number of questions he was asked about his method of healing, the director explained how the therapy works.

“First of all I create a family tree. I look at the family - brothers and sisters going as far back as great grand parents,” he says. “Then I draw conclusions about the nature of the problem. Sometimes it takes an hour for me to come up with a psychomagical task that the individual themselves must carry out. They become their own healer.”

But where is the magic in psychomagic?

Jodorowsky’s alternative therapy goes beyond language and is used in Tarot card readings and the theatre. The director says he would like cinema to be used to solve spiritual problems.

“I want cinema to have the same value as a sacred text. I want us to go deep inside ourselves,” he says.

The film was partly financed through a crowdfunding platform on social media which raised more than 162,000 euros. Around 2,500 people contributed financially to the making of the documentary.

Jodorowsky’s other films Endless Poetry and The Dance of Reality were also financed in the same way. The third part of this trilogy has yet to be filmed.

Psychomagic – A Healing Art is in cinemas from October 2.