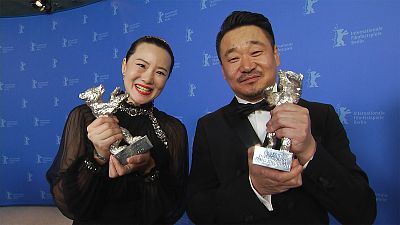 The voice of female filmmakers was heard loud and clear at this year's Berlin Film Festival.

Of the 16 films presided over by French actress Juliette Binoche and her jury, seven were directed by women.

The largely autobiographical comic drama tells the story of a former Israeli soldier who tries to reinvent himself in modern-day Paris.

Speaking to Euronews Lapid said: _"The only thing that I'm interested in at the end of the day is the truth - finding, digging inside the moment and going as far as possible, and that's how we work."
_

Francois Ozon's ""Grâce à Dieu"" or ''By the Grace of God" took the Grand Jury Prize.

The French docudrama tells the story of a group of men, called the La Parole Libérée, who seek redress after being abused in childhood  by a Catholic priest.

_"It's complicated, I have to admit that I'll think about it more next time because there's been a lot of resistance, a lot of violent reaction. There's been a lot of people who did want to see this film released or be seen, so it's been a real fight, though that's nothing compared to the real victims went through," Ozon explained.
_

"With this prize I'd like to thank the members of La Parole Libérée who inspired me," he added.

German film director Angela Schanelec took the home director award for her film "I was at home, but". The film centres on a widowed mother whose teenage son runs away for a week, only to return home without saying a word.

China's Yong Mei won the the Silver Bear for best actress and Wang Jing Chun won best actor - for their roles in the Chinese film “So Long, My Son” by Wang Xiaoshuai. Both play a married couple whose lives are turned upside down after their son drowns.

There was also a special tribute for the Festival's flamboyant outgoing Artistic Director, Dieter Kosslic.

Speaking to Euronews, he said: "Bye euronews it's great that you have been here with me. Hope to see you again at the Berlinale."

Reporting from the festival, Euronews's culture correspondent Wolfgang Spindler said: "After 18 years its the last edition for film festival Dieter Kosslick – he succeeded in strengthening the festival's political profile, attracting international stars and supporting female film directors. With 350,000 tickets sold every year, Kosslick made the Berlinale the world's most accessible film festival for the audience, a great job, thanks Dieter Kosslick."