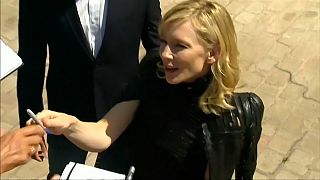 5 women versus 4 men. It's a majority female jury that will choose the Palme d'Or at the Cannes Film Festival, that opens on May 8th.

A regular on the hallowed red carpet, American actress Kristin Stewart is one of the judges having to spend plenty of time in dark rooms on the Croisette before revealing the winners at the Closing Ceremony.

Beside her will be Léa Seydoux. The French actress who first became known to the public in Cannes, when the film "Blue is the Warmest Colour " won the Palme d'Or in 2013.

Festival director Thierry Fremaux said as he announced the line up for the 71st festival that he had been conscious of gender balance in the organisation of the festival.

American director Ana DuVernay and Burundian singer Khadja Nin are the other women on the jury.

It's the first Cannes festival organized since the revelations about sexual harassment in the film industry.

Jury President actress Cate Blanchett was one of the first celebrities to openly speak out against Harvey Weinstein.

The producer has been accused of sexually harassement or assault by more than one hundred women, including Léa Seydoux.

No Netflix films at the Canne Film Festival in May