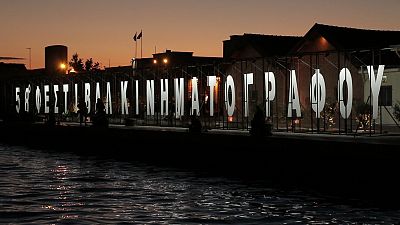 The 58th Thessaloniki International Film Festival hosted 183 films from 58 countries. There were also masterclasses, special events and many tributes.

The festival hosted a tribute to Ruben Östlund, who won the Golden Palm in Cannes this year with “The Square”. The film focuses on Christian, a contemporary art curator who tries to find balance between his duties as a divorced family man and noble citizen. When someone steals his mobile phone and wallet, an unknown side of himself will awaken.

The 43 year old Swedish director likes to turn life into cinema. His films are a satirical reflection on human nature. With his poignant humor and his penetrating observations he consistently studies people in their ordinary life, with empathy and understanding.

‘I think of my films as almost like sociological examinations, or investigations. I think that if you look at sociology is a beautiful topic, because it dares to look at as humans, when we fail. I think that I am dealing with quite much the same things, when I am doing my scenes. I am trying to create a set up that is easy to identify but hard to handle.’

It is the 7th time that Alexander Payne comes to Thessaloniki. He presented his new production “Downsizing” (US Release December 22). It is a science fiction comedy-drama film about a couple who undertake a procedure to shrink their bodies so they can start a new life in a new community. A comedy about human relationships in a gloomy environmental context. Matt Damon stars in the leading role.

“Dolphin Man” is a documentary about the life story and legacy of Jacques Mayol. He was the greatest free-diver in history, whose life became the inspiration for Luc Besson’s hit film, “Le Grand Bleu”. Jean Marc Barr played Mayol in “The Big Blue” and he is now the narrator in this documentary.

‘The film talks about the man himself (Jacques Mayol) and about the complications of being in a passion like he was and what he sacrificed. For me, all of the sudden, there was a chance now that younger generations can find out now that the guy I was playing, was just a character and a fable and the real man is much more interesting.’

Ildiko Enyedi, director of the film “On body and Soul”, which won the Golden Bear in the last Berlinale, was also in Thessaloniki and was honored with a tribute. She has won more than 40 international film awards.

The film “Secret Ingredient” by Gjorce Stavreski, a FYROM-Greece coproduction had its world premiere in Thessaloniki, before it participates in Tallinn Black Nights 2017 first features Competition Program.

But what new ideas and programmes were in the concept of the 58th Thessaloniki film festival?

Orestis Andreadakis is the director of Thessaloniki International Film Festival,

‘First, we had a theme, a concept for the films of the international competition program, that was “Taking Roots”. This notion comes from Simone Weil’s book “The Need for Roots”. This book was our guide in the film selection process. Secondly, we commissioned 14 young Greek artists to each produce an artwork inspired by a film in the competition program, making their own comment on each film, and thirdly we started up a new award for virtual reality films.’

The Greek festival is the second film festival after Venice that introduces a new VR competition. This year, ten films proved that this is the new cinematic road for the future.