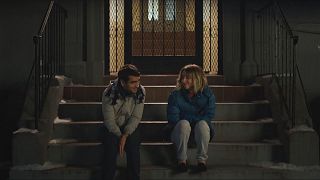 Pakistani-born comedian Kumail Nanjiani stars as himself in The Big Sick, a romantic comedy based on the unconventional beginnings of his relationship with writer Emily V Gordon.

His parents had an arranged Muslim marriage planned for him, but Nanjiani ultimately chose Gordon, a white American, as his wife – and the pair wrote a movie about it.

“It was hard for a few reasons. One, I’d never done any acting like this. I’d only ever done fully comedic stuff so it was a different step for me to do some dramatic stuff. Then I’d also never been the lead of a movie so that was something to be scared of. And then that’s said, everybody was so wonderful and confident in me that it really helped me,” said Nanjiani.

Gordon added: “It was also therapeutic and lovely to be able to… rewrite your own history and be able to kind of put a different spin on it possibly if you like. And also to just kind of revisit and clarify thoughts that you maybe had and emotions you had and put them down on a piece of paper.”

The title of the movie refers to the mysterious and debilitating illness that landed Emily into intensive care and got Nanjiani to confront his true feelings.

The Big Sick has had a very strong start at the US box office, along with a flurry of positive reviews portraying it as a smart, charming and welcome movie about love trumping cultural differences.

The film is now on release across Europe.

I promise you: It’s the best “Muslim guy falls in love w a woman in a coma” film you’ll see. This year. Starring me. https://t.co/LhLrNheVxT