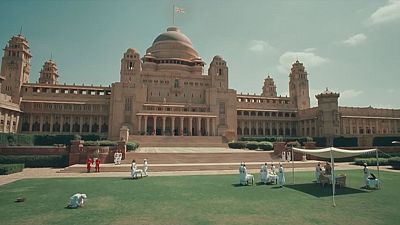 The final days of the British Raj are explored in ‘Viceroy’s House’. It is a period drama from 1947 when British India was split into India and Pakistan.

For the director, Gurinder Chadha the story is a highly personal one.

“I actually went to my ancestral town and found the big house that my grandfather had built and there, in 1947, my grandmother and five little children had all left as refugees overnight and living in this house now were five families who themselves had been refugees coming from the other side,” she said.

He was assassinated a few months after independence by a radical Hindu nationalist who objected to his secular vision for India. There was a huge human cost.

“Fourteen million people were displaced, in the greatest mass migration in modern history and almost two million people died, so it’s a great honour for us to tell their story and honour those people,” said co-star Manish Dayal.

The film stars Hugh Bonneville as Lord Louis Mountbatten, the last British Viceroy of India and the man who handed the country independence. He was assassinated by the IRA in 1979. Gillian Anderson play his wife.

“I think one of the things that struck me which I didn’t realize was how peacefully the varied religions lived side by side prior to that division, prior to the idea that there was going to be boundaries and borders and walls. I find that quite remarkable,” the actress opined.

Pakistan marks the independence day on 14 August, while India celebrates on 15 August.

“Viceroy’s House” is released in the UK and Ireland on Friday March 3.