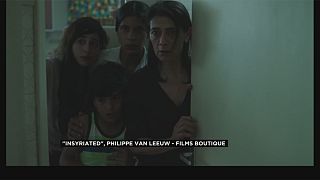 The awful realities of life in Syria. That is the theme in the war drama ‘Insyriated’ which was shown at the Berlin International Film Festival.

The Belgian-French-Lebanese co-production centers on a mother trapped with her family in their Damascus apartment while the civil war rages outside.

Director Phillip Leeuw said he wanted to draw attention to the plight of ordinary people in the country.

“I just decided that I really wanted to open a window on the suffering of these people that were trapped in there, without any means of defending or doing anything else but trying to go on a day by day basis,” he explained.

‘Insyriated’ is shot almost entirely inside the walls of an apartment’. It becomes something of a prison for Oum Yazan, a mother determined to survive a war, the brutality of which is conveyed mostly through the sounds of bombs and sniper gunfire.

The film forces viewers to ask themselves how they would act in the same situation.

The screening at the Berlinale sparked silence and then tears from the audience.

“I am really sad to say that I was very happy yesterday because of the reactions of the people. And somehow the silence after the screening of people said it all. I myself was speechless after because, because of the hardness of the movie and because of the subject of it,’‘ said actress Hiam Abbass.

‘‘Insyriated’‘ screened in the Panorama section of the Berlinale and is not competing in the competition.