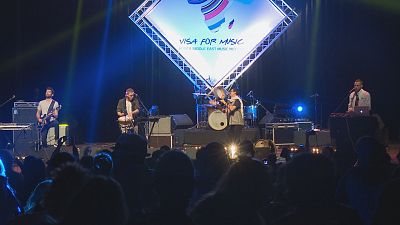 One of the hippest Palestinian bands around is 47 Soul.

Formed in Jordon in 2013 the band base their music on ‘Dabke’ an Arab folk dance with additional Middle Eastern influences.

Wolfgang Spindler , the cultural reporter of Euronews met the musicians at the Visa For Music fair in Rabat.

“We bring the sound of our region, which is the sound of Great Syrian, Levant The Levant is an approximate historical geographical term referring to a large area in the Eastern Mediterranean, which is Palestine, Lebanon and part of Iraq, the music is inspired from the wedding , the ceremonial music that happens in the towns and villages.”

The traditional roots of the music are spiced up with hip-pop, reggae, analog synthesizers and guitar licks.

Visas are an issue for the band and travel is difficult as Tareq Abu Kwaik explains:“If we had the ability to travel…all the Arabs, if we had no boarders to travel between each other, like in Europe, we would have like a union, you know, then I think we could build a lot because the problem now is we don’t know each others peoples, its the first time I have seen my Moroccan people, it’s the first time I see these brothers and sisters and I know, we feel the same about a lot of things but we need to talk you know , we need to sit down and focus.”

‘Intro to Shamstep’ is far and away the bands biggest hit to date.

Politically charged lyrics are now resonating around Europe as the band tour the continent.

Rabat beats to sound of Visa for Music