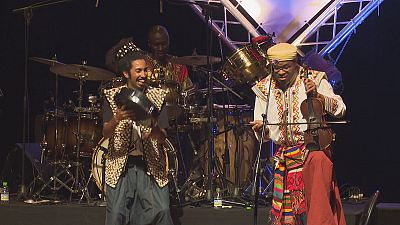 The Visa for Music gathering, now in its third year in Rabat, Morocco, brings music professionals together from Africa and the Middle East with market development in mind. The event includes professional training and music production, artist management and international marketing workshops.

The international fair exists because of official conviction that behind creativity there must also be a well-organised music industry and infrastructure.

“It was essential for us here in Morocco to strengthen the show biz industry and also to boost the key industries like production and distribution companies. The state can certainly encourage musical creativity but this is useless when there is no distribution to the largest possible audience,” says Morocco’s Minister of Culture Mohamed Amine Sbihi.

Almost 50 bands performed during the 4-day-event, like panafrican reggae band “Africa United” with members from Morocco, Ivory Coast, Congo and Comoros. The band, founded 10 years ago by Comoran Fahad Faisoil, is based in Rabat.

“I am here at the Visa For Music Fair so I can find contacts or anything else for our career and we can play abroad,” he says.

“I took back two artists from Visa For Music and they showcased at the Cape Town Jazz Festival, For the first time I had Hicham Telmoudi, the violonist. who killed, they loved him, and now I am booking him with Deepak Pandit, one of India’s greatest violinists, in India.

Two violinists playing together and I brought the other one that you liked, Istanbul Session that was way out, I thought it was. The crowd loved him and that’s why I’m back here again to look for some more talents,” said Domingo.

Carlos Lopes is from Cape Verde and based in Paris. He played a showcase concert brimming with the West African archipelago’s joyful sounds, the singer-songwriter only needing a few tunes to get the crowd jumping when he performed at the Mohamed Vth theater. His manager was quite pleased the next day.

“We made very good contacts with music programmers, they liked the show and we already have some dates in Switzerland and maybe in Mexico, so you see, things are happening,” said music agent and producer Robert Dray.

Punk rock and electro meets the sounds of the Western Sahara. Doueh has a family of musicians for over 70 years at its heart. Guitar hero Bamaar Salmou is a Jimmy Hendrix fan. They invited French punkers Cheveu from Bordeaux to Dakhla in the Western Sahara to work together. The result is an amazing album they presented here.

Maria Semuchkina is director of one of the most important jazz festivals in Moscow. Her trip to the Visa for Music fair was her first time in Africa.

“I have never seen musicians who are hot and open-minded to such an extent. And those African rythmns, all that we lack a lot in Russia – of course its a completely different culture but if we mix it, (Russian / African), something really extraordinary could be born,” she says.

Also in Rabat were JadaL from Jordan presenting their newest album of Arabic Rock. JadaL means ‘controversy’ in English and Amman’s bad boys are one of Jordan’s most popular independent bands.

Jbara is one of Morocco’s most established rock musicians who has already performed in many countries. This is the third time the Agadir-based composer and multi-instrumentalist has been here.

“This year’s fair was great, I launched five collaborations and we will produce five albums. I also booked festivals in Lithuania, Germany and in Africa,” says Jbara.

“Here at Visa for Music, the professionals from the music industry are able to discover talents who would not have the budget to showcase their skills at the big established music fairs. Some artists have been successful and are already booked at the international music festivals,” says euronews’ cultural reporter Wolfgang Spindler.

47 Soul the sound of modern Palestine

Rabat beats to sound of Visa for Music