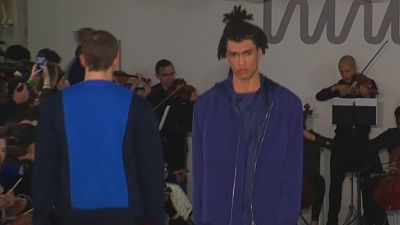 It’s a mans world – in London as fashion week kicked off in the capital.

There was plenty of the quirky and classic for male wardrobes as the city seeks to maintain its status as a hub for creativity despite uncertainty over Britain’s exit from the European Union.

A British Fashion Council survey ahead of the referendum revealed more than 90 percent of 290 designers wanted to remain in the EU.

“I wanted Britain to remain in the EU. We’ve got to abide by the results and make sure Brexit works for the fashion industry and for our country too.

‘So what concerns the fashion industry has, they want to make sure we can continue to attract talent and it’s really important the government takes on board our concerns there,” said Sadiq Khan, London Mayor.

Among the first brands presenting their new collections at the opening of the menswear fashion week last Friday
was high street label Topman Design.

It looked to the 1990’s “pubbing and clubbing scene” for a collection of loose sweaters with logos, fringed tops, neon coloured jackets and wide-leg jeans.

Slouchy hooded sweaters and neon motocross leather trousers succeeded in cementing the collection in the era during which acid house and techno music enjoyed its heyday.

British rapper Tinie Tempah made his catwalk debut with a minimalistic, casual wear collection inspired by architecture and “the everyday man”.

Tempah, who has designed clothing before, said the line would launch in April.

“To be honest I got a little bit bored of people just saying I was really stylish just for wearing other people’s clothes, you know, after a while I feel like people start to put more of the emphasis on the clothes than the actual person. You know ‘he wore this 800 pounds, he wore this 1000 pounds’ and I started to feel like I was a bit of a walking mannequin,” he explained.

The collection also featured subtle folds in designs. The looks were accessorised with white sports shoes bearing the “What We Wear” logo at the back.