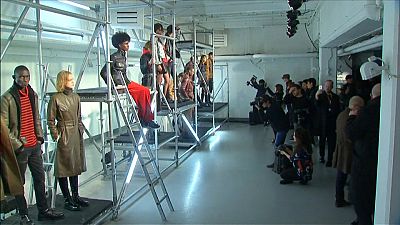 Before the 3-day event's official start on Saturday (January 6), a special show was presented with creations from ten selected graduates from the London College of Fashion.

The college, part of the University of the Arts London, is a hub for talent with high-profile graduates such as Jimmy Choo and JW Anderson attending in the past.

The brand, founded in 1924 showed their dual gender collection for the coming Autumn Winter season, inspired by the youth movements and sub-cultures in 1950s England, with a new line of the waxed-cotton and leather men's biker jackets that the brand is famous for.

A selection of 'Trialmaster' jackets from the brand's archive were also on display to celebrate 70 years of the iconic four-pocket jacket. The item was originally created to protect from the harsh weather at the Scottish Six Days Trials.

Delphine Ninous, the brand's Creative Director since 2016, said she wanted to create Belstaff garments for all kinds of weather.

"I wanted to create something that is lighter, stretch, waterproof but it is also more reasonable adaptable to more climates as well as Belstaff is developing it's not just UK-centric but it's really international. So to find something that works in Tokyo, in New York and all that."

Founded in 1924 in England, Belstaff claims an illustrious line of customers for its motorcycle jackets, including pioneer British aviator Amy Johnson, Lawrence of Arabia and Che Guevara, as well as Steve McQueen. More recently, soccer star David Beckham has been a promoter of the brand.

In 2017, the brand was acquired by the British private company Petrochemicals group Ineos which marked a return to production in the UK.

Bring on the Boys: Men's Fashion Week in New York

Homage to David Bowie at men's fashion week in London