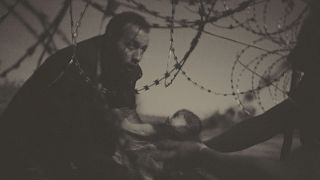 The World Press Photo exhibition has opened in Budapest’s Museum of Ethnography.

The camera is like a glass wall between me and reality. If I start thinking about what I'm seeing, then I'll think 'Oh my god' and put down the camera and start crying, but then there would be no pictures.

The jury selected the winning works from more than 80.000 pictures by photographers from all over the world. No surprise, the dominating theme this year was the global migration crisis.

Photo of the year went to Australian photojournalist Warren Richardson for his image of a baby being handed to a Syrian refugee through a razor-wire fence.

“The exhibition powerfully reflects the determining event of the year: the migration crisis,” explains the show’s curator, Tamas Revesz, himself an award-winning photographer. “This exodus which started and noone knows when it will stop, and the question is how people react to it.”

Also running at the Ethnographic Museum, ‘Exodus’, which shows the Pulitzer Prize-winning works of Reuters photographers, also on the theme of migration.

It includes the works of two Hungarian photographers, László Balogh and Bernadett Szabó. She told Euronews that they worked non-stop for five weeks, which made it difficult to process what was happening.

“The camera is like a glass wall between me and reality. If I start thinking about what I’m seeing, then I’ll think ‘Oh my god’ and put down the camera and start crying, but then there would be no pictures. The pace was tough. When I finished working, in the evening when it all felt too much or while I was sending photos during the day, when I was done with a series of pictures, I would sit in my car to send the pictures, and yes, sometimes I would cry a little when I was there by myself,” says the young photographer.

Both photo exhibitions run at the Museum of Ethnography in the Hungarian capital until October 23.

Last week, in a vote on closing the door to refugees, Hungarian prime minister Viktor Orban suffered an embarrassing setback, after failing to convince a majority of his population to vote in an anti-immigration referendum.