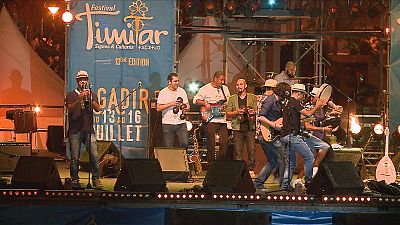 Here are some of our top picks from The Timitar Music Festival in Agadir.

Tiken Jah Fakoly’s reggae music promotes Africa’s economic, political and cultural renaissance with an arm outstretched to the Carribean. Following outspoken criticism of Ivorian politicians Jah Fakoly received death threats and was exiled from his native Ivory Coast in 2003. He took up residence in Mali. 4 years later, he was declared ‘persona non grata’ in Senegal after criticizing President Abdoulaye Wad.

As a practicing Muslim, Tiken Jah Fakoly sees ongoing terrorist attacks in the name of « Allah » as opposing the values of his music. He told reporters:

“Religious extremism is indeed a problem today, but it is a global evil, everyone is affected, so we need a common struggle and a common solution. I think it’s very very serious for Africa because we are a continent of the future and I think that terrorism today is very dangerous for the health of our development.”

He went on to explain where Reggae fits in saying:
“Reggae speaks of unity, reggae combats racism, reggae talks about brotherhood and hospitality so I think reggae really has a role to play in the world today.”

Djmawi Africa perform a rich blend of styles demonstrating to adoring audiences that what borders divide, music can transcend. The Algerian band are among several pioneering Maghrebian groups who are revisiting traditional music like Chaabi, Gnaoua, and fusing it with Rock and Reggae and much more.

“The rhythms are very universal, with melodies that are more local to the Maghreb, to Algeria and Morocco. So I think it’s this mix that speaks to the body a little and it’s sort of a characteristic of the concerts we do, we are talking to the body, it really gets people moving, especially the kids.”

Achraf, Khalifa and Mouhcine are the core of Marrakech- hip hop- band Fnaïre . Formed in 2001 the band have enjoyed huge success. Their lyrics, ring true for many young Moroccans in a country torn between traditionalism and modernism. Though influenced by American Hip Hop the trio’s message, as Khalifa explained, couldn’t be further from the violence of Gangsta Rap.

“Our message is to always stay positive in life and it’s not easy, we know that. It’s not easy to be positive but we try to push forward. We try to develop ideas towards positivity.”

His bandmate Mouhcine added, “Peace! We must love each other and love life to move forward in life together…”

The Singer and Violinist – Daoudi – from Casablanca is hailed all over Morocco as one of the finest Chaabi musicians. Chaabi is a key part of Maorrocan traditional weddings. It’s only aim…to entertain.

Daoudi closed this year’s Timitar Music Festival – to a 200 000 strong crowd at Agadir’s Place Al Amal. The dancing went on well into the small hours.

The Timitar Music Festival is a huge melting pot of musical heritage from across the globe which places amazigh culture front and centre.
In the 4 days of the festival almost half a million people were in attendance.

Timitar, the Berber festival of tolerance