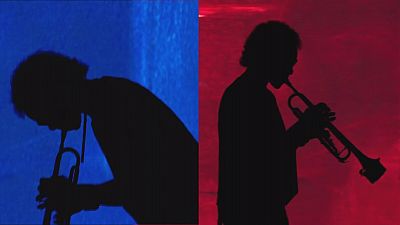 Miles Davis, one of the most prolific musicians in American history, went musically mute for several years in the 1970’s.

Actor-director Don Cheadle tapped this troubled period in the jazz legend’s career because he found it the most fascinating.

The result: Cheadle’s filmmaking debut “Miles Ahead” delves into the mind of a genius stuck in creative block.

“I said, let’s figure out a way to find him at a time where he isn’t playing but trying to figure out what to play, and create an experience that this tornado starts swirling around and he finally is spit out of it and has his voice again,” Cheadle said.

The actor, best known for his performance in Hotel Rwanda, spent years learning the trumpet to get into Davis’s skin.

Ewan McGregor co-stars in the movie as a fictional music writer who pushed his way into Davis’ orbit in hopes of writing a comeback story that would end the mercurial musician’s half-decade of self-imposed seclusion.

An impressionistic portrait of a mercurial genius

Set roughly a decade after the 1959 release of Davis’ “Kind of Blue,” the best-selling jazz album of all time, the film shows Davis holed up in his New York home after the collapse of his marriage to his muse, dancer Frances Taylor, played by Emayatzy Corinealdi. He’s at war with his record company, hobbled by a hip condition, high on drugs and haunted by his past success.

Time and space tend to blur in the movie, which is no conventional cradle-to-grave biopic. It shows the ups and down of a man who became an icon of jazz music.

While some critics called the film uneven, many said it managed to brush an impressionistic portrait of Davis’ genius and complexity, in part by showing his less glamorous side.

Birth of the uncool: Why 'Miles Ahead' succeeds https://t.co/TVIE33qsIapic.twitter.com/l29ecmk3zv

“It's a near-miss, but you have to admire the passion.” -Peter Travers on #MilesAheadhttps://t.co/NkBHiaWEDNpic.twitter.com/rPgALXyXl2